I haven’t been posting for awhile because I bought a home! My first home purchase, in fact!

It’s a two-bedroom condo and the really good part is the lake view! 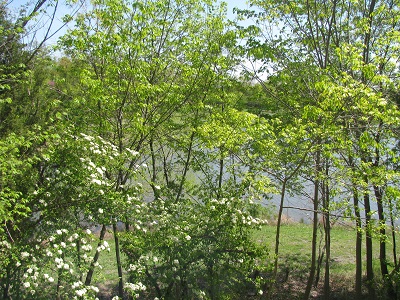 That’s the view from my bedroom window.

I also love that it’s very close to my church. I hope people will start making a habit of stopping by after church on Sunday.

So on Friday, April 19, I became a homeowner, and on April 20, 24 people from church came to help me move! I felt so loved and cared for. They moved all the big stuff for me, and it was so nice to get moved in.

But it still took a week to finish moving out. I worked four days the following week, and spent all my spare time cleaning out the old place. According to the contract, I had to have the gutters cleaned, the chimney cleaned, and the carpets cleaned, and I decided to hire a maid service to do the scrubbing. My friends hadn’t moved much of the kitchen stuff, since that wasn’t in large pieces of furniture, so I still had to clean out all the cupboards and move that stuff over, which took several trips. Anyway, I finished moving out on Friday, April 26. I got internet hooked up in my new home on Sunday, April 28.

So I should be all set to post Sonderbooks again, right?

Well, here’s an idea of what I’m up against:

I’m currently most obsessed with clearing my garage so I can actually park there: 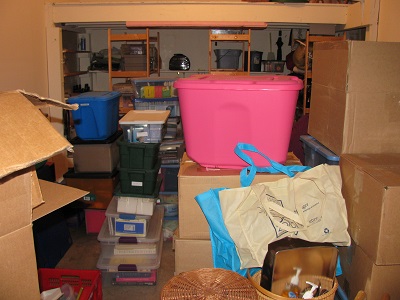 But then I’ll need to tackle unpacking.

Anyway, the nice thing about moving in is there’s no deadline. There are various little items I very much want to find (without my remote, I can’t watch Episode 2 of season 3 of Downton Abbey unless I let Episode 1 play through all the way!), but they aren’t actually desperate. So far, I’m mostly eating out, for example. But I’ll unbox my cooking utensils soon.

And I’ve been *tired*. Probably from all the toting boxes, but possibly from the latest migraine preventative I’m trying, verapamil. It seems to have worked well during the moving process, but I’m awfully tired. So we’ll see as life settles down if it gets better.