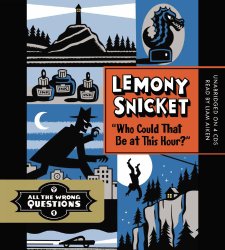 “Who Could That Be at This Hour?”

All the Wrong Questions, Book 1

I began listening to this new series by Lemony Snicket and was captivated. It’s got all of his clever humor without the sad plight of persecuted orphans that turned me off from A Series of Unfortunate Events.

We do have a 13-year-old kid – the young Lemony Snicket – setting off on his apprenticeship for a mysterious organization. His chaperone takes him to Stained-by-the-Sea, and they are told to return a mysterious statue to its rightful owner. However, Snicket quickly realizes the statue is already in the hands of its rightful owner. His chaperone doesn’t believe him, and they begin a crazy adventure.

The book is full of delightful, understated details. Stained-by-the-Sea, for example, is no longer by the sea, but there is a sinister forest of seaweed where sea used to be. The reader uses a wonderful matter-of-fact voice, eminently suitable for crime noir.

I love Lemony Snicket’s trademark, “which here means…”, always used in clever and funny ways. And the similes he uses are always bizarre, but apt. I wish I could give examples, but that’s a problem with an audiobook.

Some pieces of the mystery are revealed in this book, but it’s definitely the beginning of something bigger. There are reportedly going to be four Wrong Questions. And I have already decided I’m going to be sure to listen to all of them.

Find this review on Sonderbooks at: www.sonderbooks.com/Childrens_Fiction/who_could_that_be.html