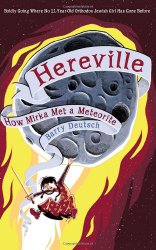 How Mirka Met a Meteorite

This is the second graphic novel about Mirka, an 11-year-old Orthodox Jewish Girl who dreams of fighting monsters and having adventures. At the start of the book, she’s grounded because of her adventures in How Mirka Got Her Sword. And just as soon as she’s ungrounded, she goes looking for trouble again. And finds more than she bargained for.

A meteorite is hurtling toward Hereville, about to kill everyone. Mirka gets the witch to help – and she transforms the meteorite into a girl who looks just like Mirka. And the meteorite, to whom they give the name Metty, is faster and stronger and even cleaner than Mirka.

At first it seems like it will be nice to have a double, and Metty can do chores and other unpleasant things. But it doesn’t turn out so nice. For starters, they can’t both show up at meals or Mirka’s stepmother would find out what’s going on. So Metty gets the first few meals. That’s only the beginning of the troubles.

This book is full of fun details and readers will be delighted with Mirka, who doesn’t necessarily think before she acts, but has plenty of heart. As the caption on the front says, here is Mirka, “boldly going where no 11-year-old Orthodox Jewish girl has gone before.”

Find this review on Sonderbooks at: www.sonderbooks.com/Childrens_Fiction/mirka_met_a_meteorite.html