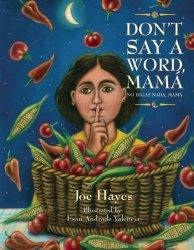 Here’s a charming story told in both English and Spanish, and one that’s worth telling in either language.

Rosa and Blanca’s mother has always been proud of how good her daughters are to each other. When they grow up and each grow a garden, each wants to share her bounty with her beloved sister.

First, when their tomatoes harvest in abundance, each sister goes to Mamá and tells her plans to share her windfall with her sister.

Of course, Blanca took some of her tomatoes to her old mother too. She told her, “My poor sister Rosa has a husband and three children. There are five to feed in her house. I have only myself. I’m going to give half of my tomatoes to my sister. But it will be a surprise. Don’t say a word, Mamá”

Both sisters have the same idea, and they don’t even notice the other sneaking to their house in the dark. Mamá sees, but she’s sworn to secrecy.

In the morning, when the tomatoes have mysteriously multiplied, each sister decides to give some of the overflowing tomatoes to her mother.

Mamá now had a very big pile of tomatoes in her kitchen. She shrugged her shoulders. “Oh, well,” she said, “you can never have too many tomatoes.”

The same thing happens when the corn is harvested. But when it comes time to harvest the chiles, Mamá decides that she may not say a word, but she will have to put a stop to the silly charade her loving daughters are carrying out. Because what will she do with all those hot chiles?

This has the humor and charm of a tale worth telling, no matter which language you choose to tell it in.

Find this review on Sonderbooks at: www.sonderbooks.com/Picture_Books/dont_say_a_word_mama.html