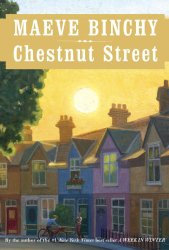 Maeve Binchy died in July 2012, so this is a posthumous publication. Her husband, Gordon Snell, explains at the front:

Maeve wrote the stories over several decades, reflecting the city and people of the moment – always with the idea of one day making them into a collection with Chestnut Street as its center. I am very pleased with the way her editors have now gathered them together as she intended, to make this delightful new Maeve Binchy book, Chestnut Street.

This book reminds me more of Maeve Binchy’s earlier books than the later ones – it is composed of many short stories, all including someone who lives on Chestnut Street. Her later novels are similar, but have longer stories, with more of the threads intertwined between stories. A few of the characters do appear in passing in additional stories, besides the ones where they are featured, though there’s definitely not the unity of theme found in her later books.

That said, these are some truly delightful stories. Maeve Binchy knows human nature. So many of these stories, short as they are, leave you with a smile or an insight or just a good feeling that someone made a great choice. I liked that they are short, since that way there are more of them, though it did make it take longer to read – because after a few stories, I found myself wanting to give an appreciative pause rather than barrel on to the end, as I will with a good novel.

A wonderful chance to treat yourself to Maeve Binchy’s characters one more time.

Find this review on Sonderbooks at: www.sonderbooks.com/Fiction/chestnut_street.html