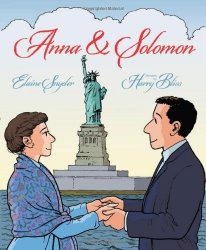 Our library system has this shelved among the biographies, but to me it’s simply a warm and wonderful picture book that happens to be true. No one would do a report on these people, they aren’t famous, but their story has the flavor of a folktale.

It turns out, as I learned from the back cover, the distinguished illustrator Harry Bliss asked his mother-in-law to put the story of her grandparents into writing. He knew a good picture book story when he heard one!

The story begins in 1897 in Russia, when Solomon and Anna got married in the Jewish quarter of the town of Vitebsk. They are happy together and very much in love, but when the Czar’s soldiers come through, they think it’s time to make the journey to America.

However, they only have enough money to pay for one passage across the ocean. Anna tells Solomon to go ahead of her, and send her money when he’s made enough to pay for her passage.

Solomon goes to America and works hard, always thinking of Anna. He sends her money and goes to meet her ship with flowers. Instead of Anna, her brother Label comes off the ship.

Label was Anna’s youngest brother. He was small and skinny, and Solomon remembered how protective Anna had always been of him. Why was he here? Where was Anna?

Label carefully explained to him that Anna had used the money Solomon sent not for herself but for her brother’s passage instead.

Oy, oy, it was a great blow to Solomon, but he saw that Anna was right. Label could not be left behind; Anna had to be certain that he would be safe.

And it goes on. The next time Solomon sends money for passage, Anna’s older brother comes off the ship, and then Anna’s mother. She still has a sister left. Will Anna ever come?

Since the book is written by Anna and Solomon’s granddaughter, I’m not giving away too much by saying that Anna eventually does arrive. Their story is told with heart and compassion and a true Happy Ever After.

Find this review on Sonderbooks at: www.sonderbooks.com/Picture_Books/anna_and_solomon.html