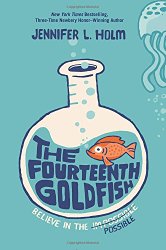 The Fourteenth Goldfish gets its name because of the goldfish Ellie was given in preschool:

I took my goldfish home and named it Goldie like every other kid in the world who thought they were being original. But it turned out that Goldie was kind of original.

Even after all my classmates’ fish had gone to the great fishbowl in the sky, Goldie was still alive. Still alive when I started kindergarten. Still alive in first grade. Still alive in second grade and third and fourth. Then finally, last year in fifth grade, I went into the kitchen one morning and saw my fish floating upside down in the bowl.

My mom groaned when I told her.

“What are you talking about?” I asked. “He lasted seven years!”

She gave me a smile and said, “Ellie, that wasn’t the original Goldie. The first fish only lasted two weeks. When he died, I bought another one and put him in the bowl. There’ve been a lot of fish over the years.”

“What number was this one?”

“Unlucky thirteen,” she said with a wry look.

“They were all unlucky,” I pointed out.

We gave Goldie Thirteen a toilet-bowl funeral, and I asked my mom if we could get a dog.

After this seemingly unrelated beginning, in the next chapter we learn that Ellie’s mother is going to be late coming home because of something to do with getting her grandfather from the police. When she does come home, she’s got a thirteen- or fourteen-year-old boy with her. He looks awfully familiar, and is very critical of her mom.

Something about this whole exchange tickles at my memory. It’s like watching a movie I’ve already seen. I study the boy – the gray-tipped hair, the way he’s standing so comfortably in our hall, how his right hand opens and closes as if used to grasping something by habit. But it’s the heavy gold ring hanging loosely on his middle finger that draws my eye. It’s a school ring, like the kind you get in college, and it looks old and worn and has a red gem in the center.

“I’ve seen that ring before,” I say, and then I remember whose hand I saw it on.

I look at the boy.

Yes, Ellie’s grandpa Melvin is a scientist, and he’s discovered a “cure for aging.” He discovered a new kind of jellyfish that can actually revert its body to the polyp stage, it’s younger self. He made a compound with the specimen and tested it successfully on mice, reverting them to adolescents. Then, naturally, he tried it on himself, and the result is an apparently thirteen-year-old “cousin” living with them.

Melvin has a mission – to break into his lab and recover the jellyfish specimen. The security people there don’t believe he’s the same person as is shown on his badge.

But living with his adult daughter and eleven-year-old granddaughter has some challenges. Ellie’s mom insists that he has to go to school, since he doesn’t want to get the police coming after them. As Ellie gets to know him, she finds the science he talks about more and more fascinating. And she’s happy to try to help him break into the lab.

This book is a lot of fun, and presents a refreshing perspective on aging, science, and the generation gap. Without giving any specifics, I’ll say that I didn’t buy the ending, so that made it fall short of greatness for me. But I did like the way she interwove themes throughout the book, and I liked the look at how an old man would act if he suddenly became a teenager again.

Find this review on Sonderbooks at: www.sonderbooks.com/Childrens_Fiction/14th_goldfish.html