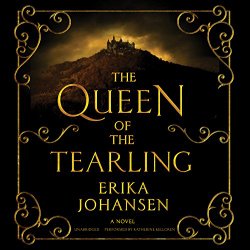 The Queen of the Tearling

Once I saw that Katherine Kellgren, the narrator of The Incorrigible Children of Ashton Place reads this book, I knew I would enjoy listening to it. She is an outstanding vocal performer. (It’s happening – I’m getting to be a fan of certain audiobook performers.) She seamlessly uses different voices for the different characters, male and female, so you can tell who is speaking just by the sound of her voice.

The story she reads is also excellent. Kelsea Raleigh is 19 years old. She’s been raised in hiding, in the forest, but she is Queen of the Tearling. The Tear is a kingdom in the New World, made from emigrants from England and America who in some distant future time made The Crossing, leaving the old world behind.

At the beginning of the book, the Queen’s Guard has arrived. They are going to take her to the capital city to rule as Queen of the Tearling.

There are many who want Kelsea dead, including the Regent, her uncle, and The Red Queen, ruler of Mortmain, the neighboring kingdom, to whom the Tear send a horrible tribute. Kelsea has been told nothing about her kingdom and nothing about what it will take to rule. She has been given a sapphire necklace, with a jewel that seems to have a magic all its own.

This story has some horrible moments – Some graphic violence, as well as awful things going on in that world. This is fantasy for adults, and it doesn’t pull away from sex or violence. But mostly, it’s a story of a young woman coming into her power, trying to make things right.

Kelsea inherits a throne that’s corrupt. On her journey to the capital city, two different groups come after her, both very dangerous. When she arrives, a horrible spectacle meets her eyes. Even when she’s “safely” in the Queen’s Wing of the Keep, more threats to her life arise.

This book doesn’t tie up all the loose ends, so I very much hope it is only the first book of a series. I liked Kelsea – tough and determined, but very young and alone. I want to find out how she will deal with the challenges that are sure to continue.

Find this review on Sonderbooks at: www.sonderbooks.com/Fiction/queen_of_the_tearling.html