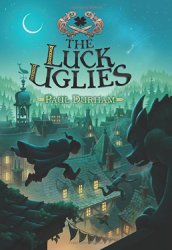 We never do find out why the Luck Uglies are called the Luck Uglies. But they are not monsters. They are mask-wearing outlaws who have been banned from Village Drowning by the Earl.

Rye and her friends Folly and Quinn live in Village Drowning and begin the story by accidentally stealing a book and running over the rooftops to escape pursuit.

The Earl who oversaw the affairs of Drowning had not only banned women and girls from reading, but went so far as to outlaw certain books altogether. None was more illicit than the book Rye now pressed close to her body, Tam’s Tome of Drowning Mouth Fibs, Volume II — an obscure history textbook that was widely ignored until the Earl described it as a vile collection of scandalous accusations, dangerous untruths, and outright lies. Even an eleven-year-old could figure out that meant there must be some serious truth to it.

There are, in fact, monsters in this book — the terrifying Bog Noblins who live outside Village Drowning in the forest Beyond the Shale. Rye herself has a close encounter with one. But someone rescues her. When she wakes up in her home, she’s worried about the village.

“Mama,” Rye said, pushing her mother’s hand away from her face. “We need to tell the soldiers. Before it, it . . .” Rye shuddered. “Comes back.”

“Darling, quiet now.” Abby eased her back down. Your close call is something best kept to ourselves. Bog Noblin attacks attract attention. The Constable — and the Earl — would be eager to speak with you. That’s not the type of attention we want.”

“But what about the rest of the village?” she said.

“Riley,” her mother said. “Listen to me carefully. I’ll make sure the right people know what happened. But at the moment, you need to rest. Your encounter in the bog was not the only trouble that befell you on the Black Moon. You were poisoned.”

Rye and her friends end up in the thick of danger from monsters, in a village with corrupt leadership. They need the Luck Uglies, but can the Luck Uglies outwit the Earl’s army? It turns out they will need Rye’s help.

This book does have monsters, but it comes across as a gentle fantasy adventure in the style of Robin Hood. With girls in the thick of the action.

Find this review on Sonderbooks at: www.sonderbooks.com/Childrens_Fiction/luck_uglies.html