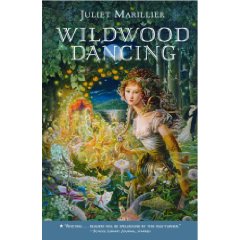 “I’ve heard it said that girls can’t keep secrets.  That’s wrong: we’d proved it.  We’d kept ours for years and years, ever since we came to live at Piscul Dracului and stumbled on the way into the Other Kingdom.  Nobody knew about it — not Father, not our housekeeper, Florica, or her husband, Petru, not Uncle Nicolae or Aunt Bogdana or their son, Cezar.  We found the portal when Tati was seven and I was six, and we’d been going out and coming in nearly every month since then: nine whole years of Full Moons.  We had plenty of ways to cover our absences, including a bolt on our bedchamber door and the excuse that my sister Paula sometimes walked in her sleep.

“I suppose the secret was not completely ours; Gogu knew.  But even if frogs could talk, Gogu would never have told.  Ever since I’d found him long ago, crouched all by himself in the forest, dazed and hurt, I had known I could trust him more than anyone else in the world.”

So begins a wonderfully intricate tale loosely based on “The Twelve Dancing Princesses,” but with many intricate plot threads woven through the tale.

Jenica and her four sisters spend the night of every Full Moon dancing in the Wildwood, in the Other Kingdom.  They have rules to keep themselves safe, like no eating and drinking while there, no wandering into the forest.

But things in the Other Kingdom begin to change when the Night People show up.  Rumors about them in the mountains of Transylvania are dark and sinister.  One of them shows a particular interest in Tati, Jena’s oldest sister.

At the same time, everyday life is getting out of control.  For the sake of his health, their father must spend the winter in the city, and he leaves them in charge.  But Cezar, their interfering cousin, quickly makes it clear that he doesn’t think women capable of that responsibility, and he begins “helping” them by taking over.  They don’t hear from their father and cannot stop Cezar.  Meanwhile, Cezar has a grudge against the folk of the Other Kingdom and vows to destroy the Wildwood.

This tale is beautifully written.  Jena is resourceful.  She loves her sisters and loves her friend the frog.  She glories in her friends from the Other Kingdom.  She tries to protect them, and herself, from Cezar’s manipulations.

This wonderful and rich storytelling quickly captivated me.  It gives the flavor of Transylvania, going beyond the stereotypes to deeper myths.  A haunting tale of wonder and cleverness and sacrifice and true love.