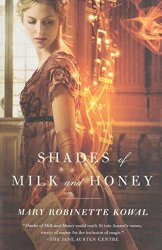 Shades of Milk and Honey

Thank you to my sister Melanie for giving me this book for Christmas.

The book is essentially Jane Austen – with magic. Now, it didn’t enchant me as much as the other Jane Austen with magic series which began with Sorcery and Cecelia. I think the reason was that the sibling rivalry was a bit intense for my taste. The younger, more beautiful sister, Melody, is intensely jealous of her older sister Jane’s accomplishments. (I missed the love between Elizabeth and Jane in Pride and Prejudice.) Those accomplishments include ability with Glamour – magical enhancement of art and music.

The story is fun, in many ways mirroring Pride and Prejudice. I rightly looked for romance to develop with the most distasteful man Jane was initially introduced to. But things do stay interesting. I didn’t particularly like the jealousy subplot, as Melody also has some men to choose from. Does she really need to like the same ones as her sister? Meeting and getting to know the various eligible men and their sisters takes up most of the book. It was also not a surprise that one of the men turns out to be a cad.

Here’s a taste from the first chapter:

When all was settled, Jane seated herself at the pianoforte and pulled a fold of glamour close about her. She played a simple rondo, catching the notes in the loose fold; when she reached the point where the song repeated, she stopped playing and tied the glamour off. Captured by the glamour, the music continued to play, wrapping around to the beginning of the song with only a tiny pause at the end of the fold. With care, she clipped the small silence at the end of the music and tied it more firmly to the beginning, so the piece repeated seamlessly. Then she stretched the fold of glamour to gossamer thinness until the rondo sounded as if it played in the far distance.

The door to the drawing room opened. Melody leapt to her feet with a naked expression of welcome on her face. Jane rose slowly, trying to attain a more seemly display. She placed her hand on the pianoforte as the room spun about her with the lingering effects of working glamour.

But only their father entered the room. “Hullo, my dears.” The plum brocade of his waistcoat strained across his ample middle. He looked around the drawing room in evident pleasure. “Are we expecting company?”

Melody said, “Mr. Dunkirk said he would honour us with a visit this afternoon.”

“Did he?” Her father looked befuddled. “But I saw him not fifteen minutes ago passing through our fields with the FitzCamerons. They looked for all the world as if they were going hunting. Are you certain you did not mistake his meaning?”

Melody’s face soured. “His meaning was clear. But perhaps he preferred to spend the afternoon in the company of a lady than a farmer’s daughter.”

Jane winced as Melody flew from the room.

If you’re in the mood for a fun old-fashioned romance with a nice dose of magic, this book is a fun read.

Find this review on Sonderbooks at: www.sonderbooks.com/Fiction/shades_of_milk_and_honey.html

Source: This review is based on my own copy, a gift from my sister Melanie.