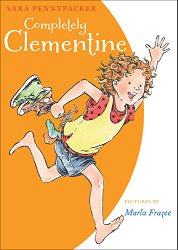 Yes, Clementine is finishing up her third grade year. I like the way Marla Frazee has even drawn her on the cover looking older. Though I read the book in an advance reader’s copy, and will definitely have to check out the final version in order to appreciate Marla Frazee’s always brilliant finished art.

The big drama of this book is that Clementine is not speaking to her father. He ate meat loaf, and Clementine has become a passionate vegetarian. She won’t speak to her father, but she will draw him pictures of sad animals in terror of being eaten.

Some big things happen in this book that were anticipated in earlier books. Margaret’s mother is getting married. Clementine’s friend Joe has grown. School is letting out for the summer. And Clementine’s mother is about to have her baby.

My dad said yes, because he’d always wanted a kid named Noodle. “It’s so good,” he pleaded, “for either a boy or a girl!” But my mother said Absolutely not!

Then I tried a compromise, which means nobody wins, but nobody loses, either. “How about a thing-name then? Let’s give the baby a name that’s also a thing, at least.”

My father loved this idea too. My mother rolled her eyes at all his suggestions: Lug Nut, Pencil, Q-tip, and Noodle again. But she didn’t hate the thing-name idea. “Dawn,” she said, “that’s a lovely name. Or maybe Colt, if it’s a boy.”

“Maybe later. We still have two weeks. I have a feeling the perfect name will show up by then.”

And it’s not really a spoiler to say that indeed it does.

This is a grand completion to a wonderful series especially right for second and third graders. (But which adults also can’t help but love. So if you’re looking for a wonderful read-aloud, look no further.)

Find this review on Sonderbooks at: www.sonderbooks.com/Childrens_Fiction/completely_clementine.html