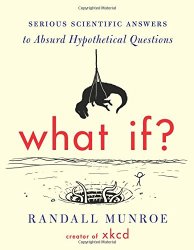 Randall Munroe is the creator of xkcd.com. Fans of xkcd will have already read this book. So I should probably try to reach those who have not yet discovered the genius that is xkcd.

The Disclaimer at the front of the book says a lot:

Do not try any of this at home. The author of this book is an Internet cartoonist, not a health or safety expert. He likes it when things catch fire or explode, which means he does not have your best interests in mind. The publisher and the author disclaim responsibility for any adverse effects resulting, directly or indirectly, from information contained in this book.

I also want to say that this is the book that reinforces my belief in the Meyers-Briggs Personality Theory (See alittlebitofpersonality.com). As soon as I heard this book was coming out, I knew that I’d be buying one for both of my sons and my father for Christmas. After I’d done so, I realized that all of these men are INTP personality types. I noted as much on Facebook, and my older son commented that Randall Munroe is the quintessential INTP.

And what is the quintessential INTP? I think of that as someone who chases rabbit trails, who explores thoughts wherever they lead – someone, in fact, who gives serious scientific answers to absurd hypothetical questions. And enjoys doing so. And even writes a book about it.

Here are some of the absurd hypothetical questions this book answers:

What would happen if the Earth and all terrestrial objects suddenly stopped spinning, but the atmosphere retained its velocity?

If every person on Earth aimed a laser pointer at the Moon at the same time, would it change color?

What would happen if everyone on Earth stood as close to each other as they could and jumped, everyone landing on the ground at the same instant?

What would happen if you made a periodic table out of cube-shaped bricks, where each brick was made of the corresponding element?

If every human somehow simply disappeared from the face of the Earth, how long would it be before the last artificial light source would go out?

Is it possible to build a jetpack using downward-firing machine guns?

If everyone on the planet stayed away from each other for a couple of weeks, wouldn’t the common cold be wiped out?

Let’s assume there’s life on the nearest habitable exoplanet and that they have technology comparable to ours. If they looked at our star right now, what would they see?

What would happen if you tried to fly a normal Earth airplane above different solar system bodies?

If you call a random phone number and say “God bless you,” what are the chances that the person who answers just sneezed?

What is the farthest one human being has ever been from every other living person? Were they lonely?

What if a rainstorm dropped all of its water in a single giant drop?

The book consists of answers which take these questions at least mostly seriously, accompanied by Randall Munroe’s distinctive stick figure illustrations. He often goes off on tangents taking off from these ideas. For example, with the question about everyone on Earth standing close together and jumping, he points out that the real problem would not be with the jump, but with all those people trying to get back to their respective homes.

The survivors spread out across the face of the world and struggle to build a new civilization atop the pristine ruins of the old. Our species staggers on, but our population has been greatly reduced. Earth’s orbit is completely unaffected – it spins along exactly as it did before our species-wide jump.

But at least now we know.

I was also entertained by the selection of questions Randall Munroe called “Weird (and Worrying) questions from the What If? inbox” These he doesn’t answer, but I find it amusing as to which questions are weird even to Randall Munroe.

Here are a few examples of these “worrying” questions:

What sort of logistic anomalies would you encounter in trying to raise an army of apes?

What temperature would a chainsaw (or other cutting implement) need to be at to instantly cauterize any injuries inflicted with it?

How many nuclear missiles would have to be launched at the United States to turn it into a complete wasteland?

Those some examples of questions. Now let me give an example of his style of answers. Though without reproducing the stick figures, you definitely don’t get the full effect.

The answer to the question “What would happen if you tried to hit a baseball pitched at 90 percent the speed of light?” begins like this:

The answer turns out to be “a lot of things,” and they all happen very quickly, and it doesn’t end well for the batter (or the pitcher). I sat down with some physics books, a Nolan Ryan action figure, and a bunch of videotapes of nuclear tests and tried to sort it all out. What follows is my best guess at a nanosecond-by-nanosecond portrait.

Two pages later, with various instructive and dramatic illustrations, the answer ends like this:

Everything within roughly a mile of the park would be leveled, and a firestorm would engulf the surrounding city. The baseball diamond, now a sizable crater, would be centered a few hundred feet behind the former location of the backstop.

Major League Baseball Rule 6.08(b) suggests that in this situation, the batter would be considered “hit by pitch,” and would be eligible to advance to first base.

What are you waiting for? If you can resist reading this book after reading these tidbits (as hard as that is for me to understand), it is probably not the book for you.

Find this review on Sonderbooks at: www.sonderbooks.com/Nonfiction/what_if.html