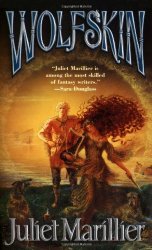 I was in the mood to read an outstanding book and wanted something that would really absorb me, so I reflected that there are still some books by Juliet Marillier which I haven’t read. I chose Wolfskin because it was a first-in-a-series title that was on our shelves at my library branch.

At first, I admit, I was a little dismayed. There’s some foreshadowing that goes on which didn’t sound good. Our hero, Eyvind, a Viking, wants nothing more than to be a Wolfskin, a berserker soldier who hears Thor’s voice. When he is young, he hears a tale about two men with a blood oath of brotherhood. Later, because of that blood oath, one of the men ends up killing his beloved, who is in the family of the enemies of the blood brother. The story is held up as an example of wonderful loyalty. And soon after, Eyvind is asked to swear a blood oath to a nobleman’s brother who is staying with them, Somerled. The reader knows this can’t end well.

Well, it slowed me down. It turns out Somerled isn’t a tremendously likable character. And Eyvind is not as clever as Somerled, and gets taken advantage of.

But I knew I could expect deeper things from Juliet Marillier, and I was definitely not disappointed. Many years later, Eyvind travels across the sea to the Orkney Islands under the command of Somerled’s brother. Events that happen there require Eyvind to trust his own instincts and stand for the truth.

Here’s a section from the beginning of the book, where Eyvind’s older brother Eirik comes home for a visit.

Eirik was his hero. Eirik was a Wolfskin. That was the most glorious calling in the whole world, for surely nothing could surpass the moment when you heard Thor’s call to battle ringing in your ears, pulsing in your blood, filling every corner of your being with a red rage that shut out any thought of fear. To charge forward in pure courage, inspired by the god himself – that bold vision tugged at Eyvind’s thoughts by day and filled his dreams by night. What matter if a Wolfskin’s life were short? Such a warrior, once fallen, would be carried straight to Thor’s right hand. One day he himself would pass the test, and become one of that band to which Eirik and Hakon belonged, as had many of Eyvind’s kin in times past. The men of Hammarsby had a noble tradition in the Warfather’s service. So Eyvind practiced with the bow and with the axe. He ran and climbed, he skated and swam. He shoveled snow and hunted and grew strong, awaiting that day. Eirik’s tales kept his dreams alive. Later, perhaps his brother would tell of the autumn Viking, the riches plundered, the battles won.

Once they get to the Orkneys, the story of Nessa is told alongside Eyvind’s. Nessa is the king’s daughter, training to be the priestess of her people. But then Somerled’s brother dies, and Somerled insists that the folk of the Orkneys are responsible, and there is trouble between their peoples.

This book includes the detailed creation of a world as it may have been, with adventure and bravery, romance and passion, right and wrong, justice and treachery, loyalty and betrayal, and a touch of magic.

Juliet Marillier has done it again. (Or I should say, “did” it again. I just preordered her next book to be published in America!)

Find this review on Sonderbooks at: www.sonderbooks.com/Fiction/wolfskin.html