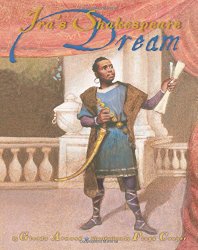 I love picture book biographies about interesting people I’d never heard anything about. The subject of this one is Ira Aldridge, an African American born in 1807 who went on to have his name inscribed at the Shakespeare Memorial Theatre in Stratford-upon-Avon, England – the only African American among the thirty-three actors to have received this recognition.

At the African Grove and the Park, people took notice of the stagestruck young man. Actors often sent Ira on errands in exchange for tickets to plays. Some of the stagehands taught him set building and costume making. They all encouraged Ira to become an actor and cheered him on as he auditioned for a small role at the African Grove.

Eventually, Ira traveled to England to study acting rather than go to a ministry college, as his father wanted him to do.

As Ira gained success, he began to use his fame as a platform for preaching the evils of slavery and raised money for abolitionism.

Ira gained more and more fame and recognition and traveled all over Europe.

By the 1840s, Ira was one of the most celebrated Shakespearean actors in Europe. His most famous role was the lead character in Othello. The dark-skinned tragic hero was commonly played by a white actor wearing black makeup.

Ira did not need this makeup. And the emotions he expressed as Othello were as real as the color of his skin. Like Othello, Ira knew despair. He had seen it in the eyes of enslaved people. And like Othello, Ira knew sadness and regret. He had felt both when he received news of Pa’s death.

This book stands out to me because Ira’s is a truly amazing story. Here is someone who followed his dream despite tremendous obstacles and achieved great success. I’m delighted that more children will learn about this amazing person through this wonderful picture book.

Find this review on Sonderbooks at: www.sonderbooks.com/Childrens_Nonfiction/iras_shakespeare_dream.html