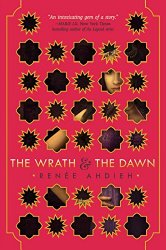 The Wrath and the Dawn

The Wrath and the Dawn is a reimagining of the story of The Arabian Nights, and I’ll warn the reader right up front that it’s only the first volume of that story.

Shahrzad has volunteered to marry the caliph who keeps killing off his wives. She plans to avenge the death of her best friend, Shiva. She begins by telling him a story, a story that she will continue the next night. She is planning to find his weakness and kill him, but things don’t turn out as they expect. And the caliph is not the monster she had thought him. And her childhood sweetheart, planning to rescue her, as well as her father, accessing magic, all do not understand the changes that happen in her.

Let me say first that there are some holes in this story. Given the reason we find out for the caliph’s murders, I have a hard time believing that Shahrzad would really have lasted past even the first night. And then the way magic works is very vague and feelings-oriented (which I never particularly like in a fantasy book). On top of that, we’re told that Shazi is determined and does what she sets out to do – It seems to me she would have had a plan for killing the caliph and would have put it in place the first night, rather than hoping to arouse his curiosity.

But that said, this is an absorbing and fascinating love story. I’m not sure that I *quite* believe, once I think about it, that they would fall in love with each other. But while I was reading it, I didn’t think about it and was wrapped up in the story and longing for them to really see each other.

So, yes, there are some hanging plot threads. But the book is worth it and the story is lovely and I will definitely want to read the next installment. Perhaps not with the urgency that would keep my bride alive if I were an evil murdering caliph, but I’ll definitely be reading the next book soon after it’s published.

Find this review on Sonderbooks at: www.sonderbooks.com/Teens/wrath_and_the_dawn.html