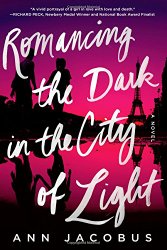 Romancing the Dark in the City of Light

When I saw author Ann Jacobus at the YALSA Symposium, I knew I’d met her at a small conference, where she’d been an organizer. I assumed it was one of the many KidLitCons I’ve been to, but when I had her sign her book and mentioned KidLitCon, she said No.

As soon as I turned away, I remembered, and went right back to her table. I should have known – when, after all, the reason I decided to get a copy of the book was that the Eiffel Tower is on the cover and it’s set in Paris – I met Ann Jacobus at an SCBWI (Society of Children’s Book Writers and Illustrators) conference in Paris almost exactly ten years before I saw her in Portland, and she was indeed one of the organizers.

Ann Jacobus did set the book in Paris because of having lived there. (Paris tends to capture people’s hearts.)

Now, I’m not the best reader for a dark book – I don’t tend to enjoy them. This book is dark, and it took me awhile to get it read because of that.

But the book is well-written, and the concept is intriguing. Summer is in Paris staying with her Mom, trying to repeat and finish her senior year of high school, because she keeps getting kicked out of schools in America. She has to finish high school and graduate from college before she turns twenty-two in order to inherit her grandfather’s wealth.

There’s a lot of pressure on her, and Summer doesn’t like it. She thinks a lot about death. She researches burial customs of different cultures on the internet. Her father died years ago. Summer carries his flask with her, filled with vodka to help her get through.

Summer would like to have a romance in Paris, and she meets two people who might fulfill that desire. One is a student at her school, Moony (Munir), who walks with a limp because of a bad car accident when he was younger. Moony is uncommonly kind – and he doesn’t deserve to have Summer’s mess in his life.

Kurt is a handsome man Summer meets at a Paris metro station, just after a woman throws herself onto the tracks in front of a train. Kurt keeps showing up. He seems to know Summer’s thoughts. There’s a smell of decay about him.

I said this book is dark. That darkness, in Summer’s life, is personified in Kurt. Yes, there are some paranormal elements going on. They are done with excellent touches, making me want to reread it now I know all that’s going on – but I don’t want to give it away for other readers. Let’s just say that we watch more and more things in Summer’s life fall apart.

The novel doesn’t end badly, though – and that’s because of Moony. And Ann Jacobus shows us Moony’s character, persistence, and kindness in a way that we believe the ending.

But Moony isn’t perfect. We also see hints that he’s not helping Summer because he doesn’t know anything about despair or problems. And that works into the ending as well.

There’s more I’d like to say, but it gives too much away. (Feel free to talk about the ending in the comments if you’ve read the book!) This is a well-written book about a suicidal teen, set in Paris. (The title is perfect!) There are Suicide Prevention Resources at the back of the book, and it actually ends up a hopeful tale.

Find this review on Sonderbooks at: www.sonderbooks.com/Teens/romancing_the_dark_in_the_city_of_light.html

Source: This review is based on my own signed copy, which I got at the 2015 YALSA Symposium in Portland, Oregon.