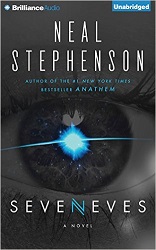 by Neal Stephenson
performed by Mary Robinette Kowal and Will Damron

When I told a coworker how much I liked The Martian, he recommended Seveneves. I’d long meant to read some Neal Stephenson, so I took on the project, listening in the car over the course of more than a month. (Fortunately, no one had a hold on the audiobook before I finished.)

First, the good things. This book, like The Martian, has a huge emphasis on technology. Almost all of it is made to sound plausible, with facts given in context and people using actual science to solve their problems.

And they are truly formidable problems! The situation in the book is this: Something (called “the Agent”) from outer space blasted through the moon and blew it into pieces. At first, people just think of it as an amazing curiosity in the night sky. But then a collision happens between two pieces of the moon – and scientists realize that there are going to be more and more collisions until finally, in about three years, the earth’s atmosphere will be filled with meteorites and everything on earth will be incinerated. This “hard rain” will last about five thousand years.

So – the people of earth begin making plans. They’re going to send up pods that can be attached to the International Space Station and try to save humanity by sending people into orbit.

More than half the book concerns these efforts of making a place for humanity to survive on the International Space Station. Then we fast forward five thousand years when their descendants begin to go back to New Earth.

I’m afraid I’m not crazy about this book. But once I’d listened to hours and hours, you can be sure I figured I might as well finish. The book is rather depressing. Besides the 7 billion people who die on earth, there are occasional scenes of gruesome violence. This book doesn’t paint a nice picture of the human race. You’d think with such high stakes, people would work together a little better.

I’m sure the science is well-researched – but I didn’t buy it at every stage. Supposedly the human race survives in space after getting down to seven living women (the Seven Eves). This is with the help of state-of-the-art genetic engineering equipment, but that was still something of a stretch. I also wasn’t sure I believed that after five thousand years there would still be seven distinct races.

And five thousand years later, ready to move back onto the planet, humans are at war with one another. There’s a huge Cold War going on between certain sets of races. Depressing to think that humans would have learned nothing in five thousand years.

Of course, the whole premise of the book runs counter to a Christian world view. Indeed, in the book after the destruction of earth, all religions die out among humans. Because 7 billion people died.

So this is indeed an interesting book because of the technology described. The story does have many moments of tension and amazing but plausible overcoming of great odds. But if you’re looking for heart-warming, definitely look somewhere else.

Find this review on Sonderbooks at: www.sonderbooks.com/Fiction/seveneves.html