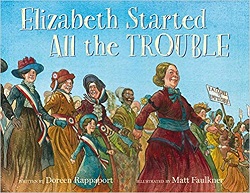 Elizabeth Started All the Trouble

This is an accessible overview for elementary school children about the struggle for women’s rights. Reading it, I discovered that I hadn’t realized myself just how long the battle had taken.

Seventy-two years later, Elizabeth started the trouble when she and Lucretia Mott were forbidden to even be seen at a convention in London against slavery. They couldn’t be delegates, and had to sit behind a curtain to hear the men’s speeches.

After this, Lucretia and Elizabeth planned the first National Women’s Rights Convention, held in Seneca Falls, New York. Elizabeth modified the Declaration of Independence to be a Declaration of Sentiments, which was a rallying call for the women’s suffrage movement.

The book shows how long and slow and adamantly opposed that movement was. It also pictures many, many of the additional women who took part. One page shows many women who worked for the war effort during the Civil War on both sides.

Emancipation came for the slaves with the Thirteenth Amendment on January 31, 1865.

Then the lawmakers began debating giving the vote to black men.

Now, Elizabeth thought, now is our chance to get the vote, too.

The next phase of working for women’s rights involved demonstrations, parades, and arrests. Some states individually gave votes to women. The people who started the struggle, including Elizabeth Cady Stanton, grew old and died.

The book ends with a double-page spread showing women from many time periods (including the present) standing together.

On August 26, 1920, the Nineteenth Amendment, granting women the right to vote, became law. The lawmakers had finally done what Abigail Adams wanted the Founding Fathers to do in that big room in Philadelphia so long ago.

The women had triumphed after battling for the vote for seventy-two years. But they knew their work was not over. There were still many unfair laws to change so that women could have true equality with men.

And we’re still working on it.

Find this review on Sonderbooks at: www.sonderbooks.com/Childrens_Nonfiction/Elizabeth_started_all_the_trouble.html