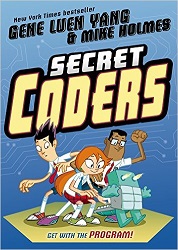 This is a graphic novel that teaches counting in binary and basic coding – and manages not to stretch credibility too far.

Hopper has been transferred to Stately Academy, which her mother insists is the best school in town. But the school is distinctly creepy.

There are creepy birds flying around. When they see Hopper’s Number 7 earrings, they open three of their four eyes. Hopper’s new friend Eni notices that when they see the number 9s all over the school, the first and fourth eyes open. So of course – the birds are robots, using their four eyes to express in binary the numbers they see! (Hey, in a graphic novel this actually comes across as plausible.)

After the birds help them figure out the combination to a locked room, Hopper and Eni find a robot turtle next to a list of commands. When they read the commands, the robot carries them out.

Then another program makes the robot trace a hexagon and open a secret passage. There they find the creepy janitor who says he’ll reveal secrets of the school if they can code a more complicated path. They are about to become Secret Coders.

It’s a fun story – fitting in at a new school, solving puzzles, uncovering secrets – and it does teach binary and LOGO coding along the way. And it teaches those things in a visual and entertaining way.

More books are on the way! It will be fun to see where they go with this idea.

Find this review on Sonderbooks at: www.sonderbooks.com/Childrens_Fiction/secret_coders.html