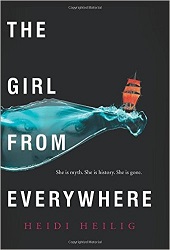 The Girl From Everywhere

I love the premise of this book. 16-year-old Nix has grown up on a time-traveling ship, the Temptation. Her father, Captain Slate, can Navigate anywhere – as long as he has a hand-drawn map. The map doesn’t have to even be of an actual place. With enough detail, Slate can even bring their ship to fantasy worlds.

They make their living gathering things from one time or place and selling them in another.

But Slate has an obsession. He wants to go back to 1868 Hawaii and stop Nix’s mother’s death.

Now, I didn’t quite believe Nix’s worries about that. She was afraid that if Slate stopped her mother’s death – she died in childbirth – Nix would cease to exist. Whereas her father believed Nix would be able to get to know her mother. I didn’t quite understand why Nix didn’t take that approach.

I also wasn’t crazy about Nix’s potential love interest, probably because I don’t go for the noble thief trope. Kashmir is a crew member who came on board from Vaadi Al-Maas, a location from the story of Sinbad the Sailor. He is a thief, and steals things for Nix from various places.

As the story opens, they are working to get a mythical bird that will heal illness, along with enough valuables to win an auction taking place in 2016 for an 1868 map of Hawaii.

But things go wrong, they end up in Hawaii in 1884, and there get embroiled in a plot against the king of the Hawaiian Islands.

This brings up an interesting ethical question: Is it okay to work with people planning to annex Hawaii to the United States when they know that’s going to eventually happen anyway?

Meanwhile, the novel takes on something of a heist plot, with their part involving a trip to a mythical place to pick up some terra cotta warriors. There’s another potential love interest introduced, a handsome youth who lives in Hawaii. And Nix learns about the place where she would have grown up if her mother had lived.

So you may be able to tell, I didn’t fall too hard for the characters in this book, but I still found it an intriguing premise. It was fun to see Nix comfortable with New York City in the present day as well as other places hundreds of years in the past. The rules of Navigating which were unveiled during the book were quite plausible, and I find myself hoping this is only the beginning of adventures for Nix and the Temptation.

Find this review on Sonderbooks at: www.sonderbooks.com/Teens/girl_from_everywhere.html