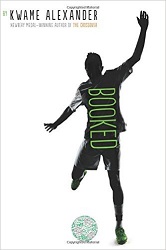 A sports novel in verse is pretty much the last sort of book I’d pick up on my own. But this one is nominated for Capitol Choices, and I did love Newbery-winning The Crossover, so I picked up this book last night and ended up reading it in one sitting. I’d forgotten just how good Kwame Alexander’s poetry is.

The story revolves around Nick Hall, a kid who loves soccer. His Dad is a professor of linguistics and he requires Nick to read from his dictionary called Weird and Wonderful Words. Nick hates this task – but his writing – the poems in this book – is peppered with weird and wonderful words, defined in the footnotes. The words include things like limerence, sweven, cachinnate, and logorrhea.

Nick’s got some conflict going on. His best friend’s on an opposing soccer team. There’s a girl he likes. Issues with teachers. He wants to compete in the Dallas Cup, but first his parents, then his own health gets in the way. But the big overarching problem is conflict between his parents.

The story is good, and compelling (I didn’t, after all, put it down until I’d finished.), but what makes the book truly wonderful is Kwame Alexander’s poetry.

Here’s a short one:

Problemo
The girls
let down
their ponytails,
high-five
their coach,
then walk over
to shake
our sweaty palms
after beating us
five to three.

It does not take
a math genius
to understand that
when you subtract
a mother
from the equation
what remains
is negative.

One of my favorites rhymes, but gives away what happens, so I won’t include that one.

And I must confess – all the white space of a verse novel did make it easier to keep going until I finished. I’m sure it will act on kids the same way, too. A verse novel and a sports novel is a great combination. It’s also a novel about words and about issues important to eighth-graders. A win all around.

Find this review on Sonderbooks at: www.sonderbooks.com/Childrens_Fiction/booked.html