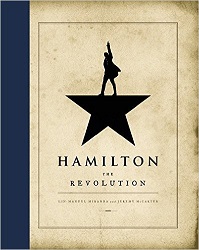 Being the Complete Libretto of the Broadway Musical,
With a True Account of Its Creation,
And Concise Remarks on Hip-Hop, the Power of Stories, and the New America

by Lin-Manuel Miranda and Jeremy McCarter

This book is magnificent! Now I really need to figure out a way to get to see the musical.

This is not, however, a good choice for audiobook listening. That’s how I started it, hoping maybe they’d include some clips from the show. Nope. (Only some bars as an introduction.)

The book itself has wonderful material added to the text about the musical. It includes the complete libretto, with large photographs. Most pages of the libretto, in fact, are superimposed over or printed next to large format photos of the actors singing that particular song. The libretto is peppered with notes from Lin-Manuel Miranda.

They tried to include these things in the audiobook. There are two “additional” CDs. One includes pdf files – of the libretto, perhaps with photos. (I didn’t check.) The other is Lin-Manuel Miranda reading the notes. But since the notes are simply read – out of context, not in place in the libretto (Presumably where they go on the libretto is in the pdf.) – you’re going to want to read them, anyway.

Now, I had listened to the first two CDs before I went on vacation. While in California, my sister played for me the wonderful cast album, which gave much more context to what I had listened to. When I got back, my hold came in on the print form of the book – and I learned that the words of the songs are all written out – right next to the information about writing and casting that song. So I switched to the print form and read the words to all the songs, with notes and with pictures, in the right order along with the chapter about writing that song and what it meant in context.

The story of writing and casting the musical and all that it means in America today and why it’s such a phenomenon is the subject of this book.

Here’s a section from the Introduction where Jeremy McCarter explains the plan of the book.

It tells the stories of two revolutions. There’s the American Revolution of the 18th century, which flares to life in Lin’s libretto, the complete text of which is published here, with his annotations. There’s also the revolution of the show itself: a musical that changes the way that Broadway sounds, that alters who gets to tell the story of our founding, that lets us glimpse the new, more diverse America rushing our way. The fact that Lin wrote the show largely in sequence means that this book can trace the two revolutions in tandem. The story of the show’s creation begins at the White House on May 12, 2009, when he performed the first song for the first time. It ends with opening night on Broadway, August 6, 2015, just after he completed the final scenes of the show.

The story is fascinating – both the story put into the musical and the story of the creation of the musical. I have now also placed a hold on Ron Chernow’s biography of Hamilton, which inspired Lin-Manuel Miranda.

Here’s a section from a chapter about Ron Chernow’s help in the writing of the musical:

He walked into a rehearsal studio in the Garment District and was, by his own admission, “shocked” by what he saw. The men who were going to sing the roles of Washington, Hamilton, and the other Founding Fathers were black and Latino. Not being a rap listener, Ron hadn’t given much thought to the fact that the people best able to perform the songs that Lin had been writing might look nothing like their historical counterparts.

Lin and Tommy saw no difficulty in making this imaginative leap. In fact, they raised it to a principle. As Tommy would state it again and again in the years that followed: “This is a story about America then, told by America now.”

Within five minutes, Ron was carried away by what he heard. He became what he calls a “militant” defender of the idea that actors of any race could play the Founding Fathers.

Just having all the words of the songs is by itself a reason to get the book – because the songs are packed with information. Having read the whole thing, I’m planning to buy myself a copy of the cast album and listen to it all again – I will catch so much more.

There’s all kinds of background information here about casting the show and putting it on, but one of my favorite chapters was about special performances they did for local high schools – and the energy that the teachers harnessed and brought back to the classroom. They included some exciting stories about the students engaging with the material.

Then they ended the chapter talking about what will happen when Hamilton is licensed to be performed in schools.

Its subject matter will appeal to history teachers, its array of juicy roles will appeal to young actors, and its mélange of musical styles will appeal to almost everybody. In a given school year, they imagine, that might mean 600 or 700 student productions around the United States.

What will it mean when thousands of students step into these roles at age 15 or 18 or 20 – roles that have changed the lives of the original cast members, who encountered them at a significantly later age? Leslie says that playing a Founding Father has made him feel newly invested in the country’s origins, something that always seemed remote from his life as a black man in America. “The empathy that requires, the connections you make, the lines you draw between the things you want and the things they wanted, that you love and they loved, I never found all that connective tissue before this show.”

Lin hopes those student productions will strive for the diversity of the original production, the ethnic mix that makes Hamilton look like a message beamed back from Future America. It means that whatever impact the show might have on Broadway, and however long it might run, the biggest impact won’t be in New York: It’ll be in high school and college rehearsal rooms across America, where boys learn to carry themselves with the nobility of George Washington, girls learn to think and rap fast enough to rip through “Satisfied,” and kids of either gender (Lin isn’t doctrinaire) summon the conviction of John Laurens, the freedom-fighting abolitionist, who sings, “Tomorrow there’ll be more of us.”

The book is framed by two performances for President Obama, and there are reflections at the end that communicate part of why this musical is so inspiring.

Unless Lin made the whole thing up – and nobody has said that he did – it suggests that however innovative Obama’s speeches and Lin’s show might seem, they are, in fact, traditional. They don’t reinvent the American character, they renew it. They remind us of something we forgot, something that fell as far out of sight as the posthumously neglected Alexander Hamilton, who spent his life defending one idea above all: “the necessity of Union to the respectability and happiness of this Country.” Obama’s speeches and Lin’s show resonate so powerfully with their audiences because they find eloquent ways to revive Hamilton’s revolution, the one that spurred Americans to see themselves and each other as fellow citizens in a sprawling, polyglot young republic. It’s the change in thought and feeling that makes all the other changes possible.

The Obama presidency will end in January 2017, but the show that shares so much of its spirit will keep running. At the Rodgers that night, the president all but anointed Hamilton as a keeper of the flame. His “primary message,” he said, was to remind people of the need to keep hoping and to work together, but “this performance undoubtedly described it better than I ever could.” The most important affinity that Hamilton will carry into its future isn’t a specific message, though, political or otherwise: It’s an underlying belief in stories, and their power to change the world.

Good community organizer that he is, the president knows that stories can be an engine for empathy, and a way to show people what they share. It’s why he introduced himself, in that first big speech in 2004, by telling his own story. In the years to come, some of the many, many kids who are going to see and even perform Hamilton will be newly inspired to tell their stories too. Every time they do, the newly kaleidoscopic America will understand itself a little more.

“I can do that,” they’ll say. And if they’re like Alexander Hamilton, they’ll add, “And I can do it better.”

Find this review on Sonderbooks at: www.sonderbooks.com/Nonfiction/hamilton.html