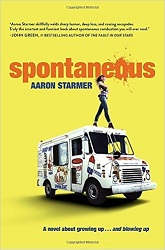 The premise of this book got my attention: Dozens of Seniors at Covington High School are suddenly, without warning, spontaneously combusting. They’re going about their days, minding their own business, when they suddenly explode, splattering blood and guts all around them.

The story is told by Mara, a member of the Senior class. Here’s how the book begins:

When Kate Ogden blew up in third period pre-calc, the janitor probably figured he’d only have to scrub guts off one whiteboard this year. Makes sense. In the past, kids didn’t randomly explode. Not in pre-calc, not at prom, not even in chem lab, where explosions aren’t exactly unheard of. Not one kid. Not one explosion. Ah, the good old days.

How would you respond if your classmates started randomly exploding? How would the world respond? That’s what this novel is about.

I did think it was a nice touch that the second explosion happened in Group Therapy, in a group that had been formed to deal with the first spontaneous combustion. That group didn’t continue.

Mara was present during the first several explosions. Eventually, sports and classes get cancelled. Only the Senior class is combusting, so they are isolated from the rest of the world.

Various theories are put forward as to the cause, and some seem more likely than others. I don’t think it’s a spoiler to say that ultimately which theory to believe is left to the reader.

The story here is compelling. I liked Mara, if I did feel sorry for her. She doesn’t cope real well — drugs, booze, and sex — but who would cope well?

There’s a little bit of a message: Essentially, I was able to pull out of it “Live for today and do the best you can, because that might be all you’ve got.” But I’m straining to get that much message out, and the whole thing felt pretty bleak.

What caused the spontaneous combustions wasn’t the only issue left unresolved at the end. A little more resolution might have made it easier to find a point to the book.

For a book about explosions, it didn’t end with a bang, but seemed to trail off.

So I didn’t feel satisfied at the end of this book, but I enjoyed the ride tremendously. Spontaneous is actually a funny book about a lot of teenagers dying. Pulling that off is rather amazing.

Besides, what would you do if you were part of a Senior class that started spontaneously combusting?

Find this review on Sonderbooks at: www.sonderbooks.com/Teens/spontaneous.html