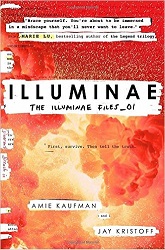 by Amie Kaufman and Jay Kristoff

First, a nod to Illuminae for winning the Cybils Award! My committee chose the book as one of our Finalists in Young Adult Speculative Fiction, and the final team of judges chose it as the winner! (I think I was the one who first put it on my working shortlist, though definitely not the last. It was one of the first books I read for the Cybils, while I was treating myself to a reading weekend right at the start. It was a big contrast with the fantasy I had been reading.)

Illuminae is a science fiction thriller. It’s set up as a file — a file of information taken from ship’s records and other sources. There’s a memo at the front, addressed to Executive Director Frobisher from The Illuminae Group.

You’ll find all intel we could unearth concerning the Kerenza disaster compiled here in hard copy. Where possible, scans of original documentation are included. Fun Times commence with the destruction of the Kerenza colony (one year ago today) and proceed chronologically through events on battle carrier Alexander and science vessel Hypatia as best as we can reconstruct them.

I found this bit quite amusing:

Some written materials were censored by the UTA and had to be reconstructed by our commtechs, though profanity remains censored as per your instruction. Sure, the story kicks off with the deaths of thousands of people, but god forbid there be cussing in it, right?

Throughout, all swearing was blacked out. So no one can complain about profanity in this novel. It amused me how one’s mind fills in the words, though.

The story, though. The story begins with the transcripts of “extracts of debriefing interviews with the subjects of this dossier, Kady Grant and Ezra Mason. The interviews were conducted shortly after the evacuation of Kerenza.”

It all began on the day Kady broke up with Ezra and was staring out the windows of her classroom figuring out all the things she should say to him. So she saw the spaceships arrive and fire on their settlement.

Their settlement was illegal, but had been there for twenty years. But a ship from rival corporation BeiTech came to wipe them out. Kady had her truck in the parking lot because she didn’t want to ride the tube home with Ezra, so she got to her truck. When Ezra knocked on the window, they both were able — just barely — to make it to the shuttles and supposed safety, though they were shipped onto two different ships of the three escaping.

The largest ship is the Alexander, a UTA battlecarrier, going to escort the other two ships to the nearest wormhole, 7 months travel away. The Alexander suffered some damage. It is not able to create its own temporary wormhole for transport, and there’s damage to AIDAN, their artificial intelligence network.

Kady is “good with computers” and figures out how to communicate with Ezra, despite all communication being shut down. And she wants to know what’s going on.

And things rapidly get worse and worse. Ezra has been conscripted to be a fighter pilot, so he witnesses AIDAN blowing up the other ship they’re escorting, though he refuses to fire on the escape pods filled with civilians, which are now under quarantine in Landing Bay 4 — but then the powers-that-be blame the destruction on the Lincoln, a BeiTech fighter ship that is out there, closing on them.

AIDAN gets shut down, but they know they’ll have to turn it on again when the Lincoln catches up to them in order to have any chance of escaping the Lincoln.

And — from there, the situation rapidly gets worse and worse. In this book you’ve got a virus that turns people into what are essentially psychotic zombies on an enclosed spaceship, military types incompetently trying to keep secrets, artificial intelligence taking over control, and an enemy space ship quickly approaching to blow them out of the sky.

And it’s a lot more exciting than I made it sound.

I realized just how high the death count was when I read the Acknowledgments at the back. It included lines like this:

… we also hope you never find yourself unexpectedly shivved through the eyehole of your hazmat suit by a small child.

… May your throats never be snipped open by a lunatic with a pair of pinking shears.

… May you never die howling, abandoned in an escape pod at the end of the universe.

… May you never be run over by a seventeen-year-old in a stolen truck after you shot her ex-boyfriend.

… We hope you’re never incinerated in a nuclear firestorm initiated by a mostly insane artificial intelligence off the shoulder of Kerenza VII.

You get the idea!

I had a few quibbles, especially with the portrayal of AIDAN. But mostly, despite the body count, this book had me cheering for Kady and her quest to get out the truth about the attack on Kerenza. I did wonder, many times, how in the universe these files were going to survive.

I’m reading a lot of fantasy novels for the Cybils, so it was refreshing to read some hard science fiction, executed brilliantly.

And I must mention, in case you couldn’t figure it out from the subtitle, that this is only Book One of a longer series. However, that is forgivable, since this segment of the story is complete, so you’re not left in an agony of suspense — though you definitely want to find out what happens next. They hit the sweet spot of what a reader would like to see in a Book One.

Find this review on Sonderbooks at: www.sonderbooks.com/Teens/illuminae.html