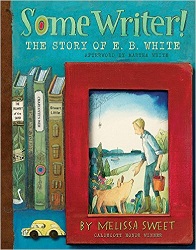 The Story of E. B. White

This book is amazing. I’ve seen Melissa Sweet do picture book biographies, such as Balloons Over Broadway and illustrations as in A River of Words. But this is a full-length children’s biography with 161 pages, with illustrations or photographs or clippings or maps or mementoes or other visual aids on every spread.

I’ve read a biography of E. B. White for adults. While it did include much more detail, this book was far more entertaining. The visual material includes many quotations from E. B. White’s work, typed out on a manual typewriter.

I was particularly impressed with the map Melissa Sweet made of E. B. White’s (Andy’s) trip across the country in a Model T with his friend Cush in 1922. She painted a map of the United States on wood. There’s a zigzagging trail with numbers and little mementoes attached to the numbers. A Legend on the side explains what each memento represents. For example, number 5 is a piece of sandpaper, and the Legend reads, “Sandpapered a dance floor earning $3.00.”

As a children’s biography, this book does linger over his childhood. He spent lots of time outdoors, but was also writing at a young age, submitting pieces to St. Nicholas. A picture of the magazine and an article clipping is included.

His time at The New Yorker is covered, and his move to Maine. There are all kinds of mementoes illustrating these. One of the pages has at the top a quotation from The Letters of E. B. White:

I have discovered, rather too late in life, that there is nothing so much fun as building a boat. The best thing about building a boat is that it allows absolutely no time for writing; there isn’t a minute to spare.

Below the quotation is a page from a book describing how to build a boat, complete with diagrams. The page also shows some old tools he would have used. Across the page in the main text, we learn that Andy built his son a boat after they moved to Maine.

Here’s a paragraph from the final chapter:

His obituary in The New Yorker read, in part, “White had abundantly that most precious and least learnable of writerly gifts – the gift of inspiring affection in the reader.” Whether he was working on a poem, a cartoon caption, an essay, or a children’s book, E. B. White felt it was a writer’s obligation “to transmit, as best he can, his love of life, his appreciation for the world.” His friend and editor William Shawn said: “Even though White lived much of his life on a farm in Maine, remote from the clatter of publicity and celebrity, fame overtook him, fortunately leaving him untouched. His connections with nature were intimate and ardent. He loved his farm, his farm animals, his neighbors, his family and words.”

I can’t overstate how thoroughly and meticulously this book is crafted. Melissa Sweet follows E. B. White’s advice and wastes no words or images. The complete package is stunning.

There’s an Afterword by E. B. White’s granddaughter, but there’s also an Author’s Note. In “About the Art,” Melissa Sweet tells us:

I set out to capture two things as I began the art for this book: the sense of place in White’s writing and the small, vivid details he describes.

She achieved this goal beautifully.

Find this review on Sonderbooks at: www.sonderbooks.com/Childrens_Nonfiction/some_writer.html