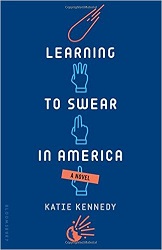 Learning to Swear in America

17-year-old Yuri Strelnikov, PhD, has been sent from Moscow to help NASA. An asteroid is headed for earth and is going to explode above Los Angeles and destroy the entire region. Unless they can figure out how to stop it. Yuri has done work with antimatter for which he hopes to win the Nobel Prize. If he survives the asteroid.

There are many factors in play. The scientists at NASA have trouble respecting a teenager. Nor do they want someone from Moscow to know what weapons are available to use against the asteroid. Never mind that this information would help with the calculations. But Yuri learns they don’t intend to let him go back home. If they survive.

Meanwhile, Yuri meets a girl, a janitor’s daughter. She is interested in showing Yuri what it’s like for a normal teenager in America. She gets him to come to high school with her to deal with her sadistic algebra teacher. He even offers to take her to prom – during which there’s a message that news about the asteroid has taken a dramatic turn for the worse.

I like the scene where Dovie and her brother Lennon take Yuri to a mall.

“You see that?” Yuri said. “If we ever have to figure out who is American spy, it will be very easy.”

“Look,” Yuri said, gesturing expansively. “Everybody standing near wall is touching wall. They lean, or put hand on it. It’s like you people have magnetic spines. You get within half meter of some wall and — sloooop — you touch it.” Yuri stood on one foot and then tilted toward the front of a candle store as though caught in its pull. “You tell Russian to stand by wall, hour later he’ll still be standing by wall. Not touching it.” He shook his head. “Your spies have no chance.”

This story is full of charm. Yuri’s just a kid who’s trying to save the world. Oh, and win a Nobel Prize.

Find this review on Sonderbooks at: www.sonderbooks.com/Teens/learning_to_swear_in_america.html