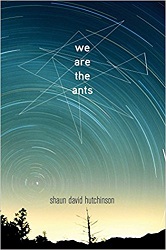 We Are the Ants

Henry Denton has been repeatedly abducted by aliens for years. They usually deposit him somewhere in his hometown of Calypso, Florida without his clothes. It was soon after the first time that his father left them. Who could handle having a kid who claimed he’d been abducted by aliens?

Now, as high school student, the aliens are giving him a choice. They showed him a button. If he doesn’t push the button, the world will blow up. If he pushes the button, he’ll save the world. And he knows when it will happen — in 144 days from when he was given the choice, on January 29, 2016. (I was wishing they set the book in the near future, to give a little more suspense. But that date is around the publication date of the book.)

Henry can’t figure out if the world is worth saving.

Henry is bullied relentlessly. The word got out that he claimed to have been abducted by aliens. In fact, his own older brother Charlie was the one who let that out.

The bullying didn’t matter when his boyfriend Jesse was alive. But Jesse committed suicide a year ago.

What’s wrong with Henry that people leave him like this? Even their good friend Audrey disappeared for months after Jesse’s death, when Henry needed her.

Since then, Henry’s been secretly hooking up with Marcus, who is one of the bullies in public. Maybe with Marcus, Henry can forget Jesse’s death.

But then a new kid comes to town. He seems to think the world is worth saving. But he’s got secrets in his past, and Henry isn’t good for people anyway.

There are a lot of reasons the world might as well end. Henry’s Mom is struggling. His grandma’s losing her memory. His brother’s girlfriend is pregnant. And the bullying has gotten much worse.

It’s hard to decide how to categorize this book. There’s the one science fiction element as Henry tells about what the aliens do to him. But the majority of the book is about coping with life and bullying and friendships and family and romance. And whether life is worth it.

I like the slightly morbid chapters sprinkled throughout the book that each relate a way that life on earth could end.

I also like that this is a book about romance with a gay boy as the main character, but the book isn’t about the fact that he’s gay. It’s about everything else he’s up against.

Find this review on Sonderbooks at: www.sonderbooks.com/Teens/we_are_the_ants.html