I just posted about a program I attended at ALA Midwinter Meeting about Creativity brought into the library using an Open Art Studio approach. They talked at length about how doing Art is not the same thing as doing crafts.

This was somewhat ironic timing, because I had just spent an hour at a program called “DK Maker Break.”

DK was promoting a new book coming out called Out of the Box about making things from cardboard.

We all made owls. 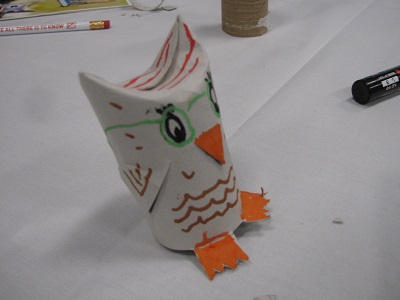 Now, I had a lot of fun, and the book is packed full of ideas and projects.

But — I could really see the point that was going to be made in the next session I attended.

First, I could easily see that my owl wasn’t very “good,” especially compared to the examples we were shown. Even compared to the people next to me making owls. My conclusion: I’m not very good at this.

Those are all things we don’t want kids to feel or think after making something in the library.

Second, I have absolutely no emotional investment in the owl. I plan to throw it away before I go home.

If it were a project I had come up with, I might care about the result. But the whole idea of making this was imposed by others. It’s cute, and it makes a fun picture. But it doesn’t express who I am or say anything about my life.

Finally, if I were a kid, and my mother decided to display the owl I made — I’d be just plain embarrassed! I know it’s not very good. If my mother tried to say it was, I would be far less inclined to trust her judgment about my art in the future! And I don’t have any emotional investment in the product, so it’s not something I want to be reminded of again and again.

It really made me think, and strongly supported the point made in the Creativity program.

Now, Out of the Box is a beautiful book. I absolutely do think it’s a great idea to make the book available to kids, along with a variety of art supplies. But a context where they can browse and choose something they’d like to make would be far more meaningful to the artist, and far more likely to make Art.

I may be a DK Maker, but the experience combined with the next workshop also has made me a person who believes in letting kids make art rather than coercing them into making crafts. 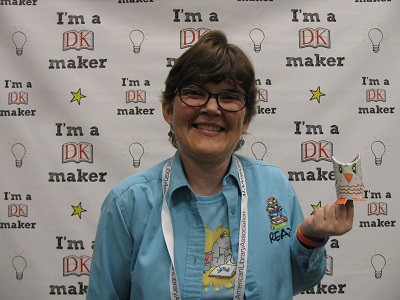