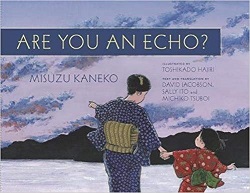 Are You an Echo?

The Lost Poetry of Misuzu Kaneko

As soon as you touch this book, you know it’s something special. You can feel the high-quality paper, which seems appropriate for a book of Japanese poems.

This is a book of poetry from Japan’s most-loved children’s poet, but it’s also a biography and the story of uncovering Misuzu’s story.

The book begins with Setsuo Yazaki, who read one of Misuzu’s poems and wanted to find out more about her. He was the one who uncovered her diaries and made public her life story, as well as many more unpublished poems. She is now widely read by children in Japan. Along with telling this story, on each spread one of her poems is given.

Then the book tells Misuzu’s life story, still accompanied by her poems. Her story is a tragic one. She was given “a disease that caused her great pain” by her “bad, unfaithful husband.” She was married for four years, but after she left, her husband was going to take their child away. The book lingers on her last night with her child, then tells us:

Misuzu wrote a letter that night asking her husband to give Fusae to her mother.
She was weak from the illness and determined not to let her husband take their child.
So she decided to end her life. She was only twenty-six years old.

On the opposite page, we’ve got Misuzu’s poem, “Cocoon and Grave” comparing a person to a silkworm. Like the silkworm becoming a butterfly, “the good person will grow wings, become an angel and fly away.”

The narrative part goes on to talk about how Misuzu’s poems were rediscovered after her death and went on to have special significance after the tsunami in 2011.

The book finishes with a collection of 15 more poems by Misuzu, with the original Japanese shown as well.

Despite Misuzu Kaneko’s tragic life story, this lovely book expresses hope, and shows the beauty of looking at the world with eyes of kindness and empathy.

How can you help but like someone with this philosophy?

onions, tomatoes, fish –
I want to like them all,

everything in the meals
my mother makes.

doctors, crows –
all of them, too.

Everything and everyone in the world
God has made.

Find this review on Sonderbooks at: www.sonderbooks.com/Childrens_Nonfiction/are_you_an_echo.html