I finished another Mathematical Knitting Project! 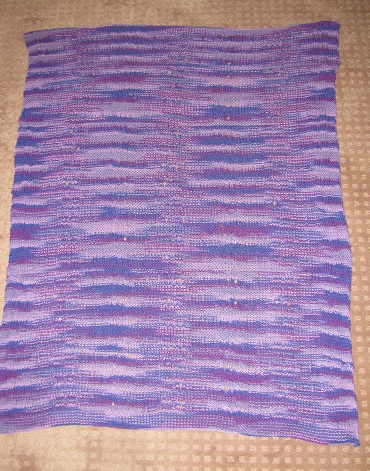 This is another Coded Blessing Blanket.

I’d finished knitting for babies in the family. (Though now it’s time to knit again.) So I asked my son if there were anything he’d like me to knit for him. He said, “Blue Blankie could use a stunt double.”

However, Tim said he’d like a purple blanket this time. And I’d already used the same pattern to knit a blanket for my niece Alyssa with a blessing coded in the stitches. So I decided to do the same for Tim.

Here’s how it works. The stitches make a sort of plaid pattern with knits and purls. The pattern has a sequence of 12 rows that make one large pattern-row. Each pattern-row has seven smooth panels on the front side of the blanket. And each smooth panel is split into two parts. So I used those panels to code words of seven letters or less.

I used some simple patterns. 0 is knit each stitch. This matches the background.

1 is purl each stitch, making a bumpy row.

2 is a cable made by holding 2 stitches to the back.

3 is a cable made by holding 1 stitch to the front. (Making the cable go the opposite direction from 2.)

4 is a yarnover and knit 2 together — making a hole.

Here’s a closer look at how the stitches turned out. 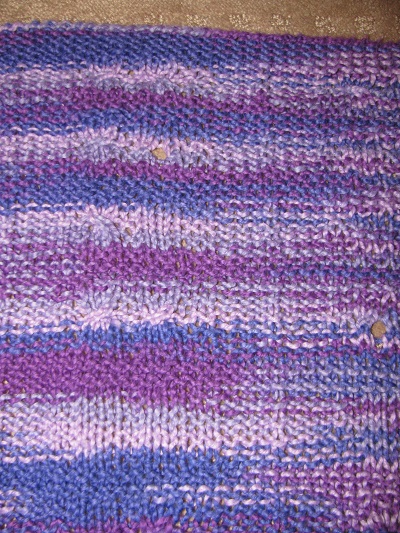 And an even closer look. 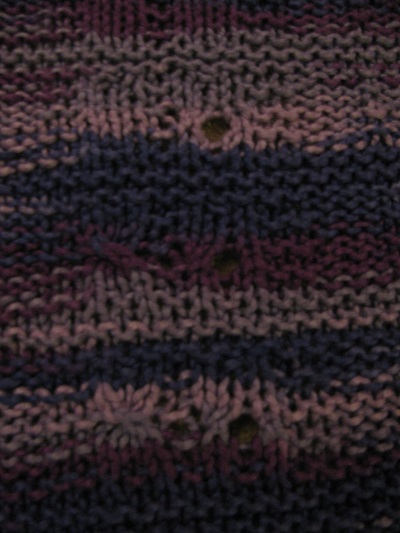 I’m not going to tell what the rest of the blanket says, except to say it’s a blessing. Can Tim read the code?

Now, this is exactly the same way I made Alyssa’s Blessing Blanket, but it turned out that hers had an error. I had almost finished Tim’s at Christmas time, but finally proofread it — and found an error, took out about 50 rows, and reknitted them. But now it’s done, and it’s error-free!

And it was a wonderful thing to knit a blanket full of love for my 22-year-old son who had just moved to the other side of the country.

May you thrive, Tim!