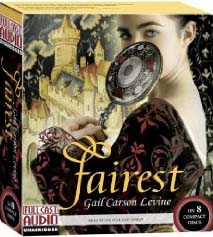 Read and Sung by Sarah Naughton and the Full Cast Family

Here’s a delightful audiobook well worth listening to.

Gail Carson Levine, author of Ella Enchanted, has written a wonderful retelling of Snow White.  Aza lives in Ayortha, where everyone loves to sing.  She’s quite an eyesore, with her pale skin and blood-red lips, but she is blessed with a magnificent voice.

The Full Cast Audio production of this book advertised that it has more songs than a Broadway musical. This is the perfect tale to listen to, since music is such an important part of the story.

My expectations were extremely high.  Full Cast Audio always does an excellent job, using so many actors for their productions.  The book itself was wonderful, and I was looking forward to hearing it done with music.

Perhaps my expectations were too high, as I was a little bit disappointed.  Unfortunately, the Playaway version that I listened to did not have good sound quality (maybe the fault of my headphones?) and tended to static any time anyone hit a high note—definitely detracted from the enjoyment, though that wasn’t the fault of the production.  I think I will want to try it again as a Book on CD, because it was good enough to want to listen to again.

After reading about how wonderful Aza’s voice was, perhaps it was inevitable that I’d be a bit disappointed in any real person trying to play Aza. (Maybe I would have been happy with Charlotte Church?) Sarah Naughton’s voice is definitely nice—it just didn’t quite fit the build-up from the story as being the best voice in the kingdom. In fact, I thought the singing voice of the actress playing Aza’s sister Areta was sweeter.

Still—those are just quibbles. The fact is, for a recorded book, this production is tremendous. They didn’t just read the book; they used many different actors to read the book, and they performed all the songs in a book about music. This recorded book is something special.

I should add that although I was slightly disappointed at first in Aza’s singing voice (though I liked her speaking voice), the Prince’s voice melted my heart. And Queen Ivy’s voice was perfect—her character showed through with every word and every note.

This production would be a wonderful choice for a family trip in the car. You’ve got a compelling story with music to keep everyone entertained. If the kids have heard the story of Snow White, you’ll have fun discussing how the story is the same, yet different. You can discuss other issues that come up. (How important is beauty? Why did the King love Ivy?) In this case, the recorded book offers even more than the original, because it has music.