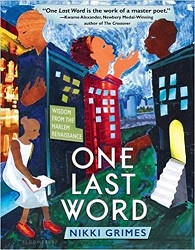 Wisdom from the Harlem Renaissance

But the heart of the book is the Golden Shovel poems Nikki Grimes has written in tribute to the Harlem Renaissance poets.

The idea of a Golden Shovel poem is to take a short poem in its entirety, or a line from that poem (called a striking line), and create a new poem, using the words from the original…. Then you would write a new poem, each line ending in one of these words.

Nikki Grimes does this with the poems she’s selected and included. She either uses one line or the entire poem, and uses those words as the ending of the lines of her own poem.

For example, the first poem selected is “Storm Ending,” by Jean Toomer, and the first line of the poem is “Thunder blossoms gorgeously above our heads,” and that first line is printed in bold. Then Nikki Grimes wrote a poem, “Truth” that uses these six words as the last word in each of the six lines.

It’s a lovely way of paying tribute to the original work. This book would be good simply as an anthology. But with Nikki Grimes’ poems playing off the original poems, and the work of this distinguished collection of artists, this book is something much more.

Find this review on Sonderbooks at: www.sonderbooks.com/Childrens_Nonfiction/one_last_word.html