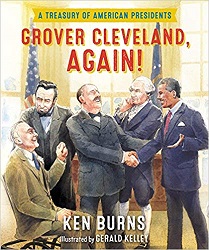 A Treasury of American Presidents

This is a big, beautiful book packed with facts about all the presidents up to Obama (since it was published before the 2016 election). Here’s where Ken Burns explains the title:

I have four daughters – Sarah, Lilly, Olivia, and Willa. When they were little and had trouble falling asleep, I would recite the names of the presidents to them. (Yes, that’s a historian’s idea of a lullaby!) After a while, they knew the names so well, we turned it into a memory game. We’d start with our first president and work our way up. I’d say “George” and they’d say “Washington”; I’d say “John” and they’d say “Adams.” Their favorite part was when we got to Grover Cleveland, the only president who had two non-consecutive terms. I’d say “Grover” and they’d say “Cleveland”; I’d say “Benjamin” and they’d say “Harrison”; then I’d repeat “Grover” and they would giggle and say “Grover Cleveland, again!” I vowed to my oldest, now a mama of her own, that one day I’d do a children’s book on the presidents called Grover Cleveland, Again! It’s been almost thirty years, but I’ve kept my promise.

I read this book alongside Your Presidential Fantasy Dream Team, by Daniel O’Brien. I’d read about one president at a time, from both books. This one has much nicer, full-color pictures. It gives the basic facts and many insights into the times of each president. It would be great for reports, and draws you into browsing its oversize, inviting pages. It doesn’t compare the presidents to superheroes like that one does, but one book can’t have everything.

Ken Burns takes a more positive approach, leaving out things like Ulysses Grant’s drunkenness. He doesn’t draw decisive judgments about the presidents’ actions. But Ken Burns is trying to inspire kids by telling about our history. He also says in the introduction:

How could someone who had never voted in an election become president? How could someone who had hardly ever gone to school keep the country from being torn in two? How could a man with dyslexia lead the country through a world war, and one with a serious physical disability guide us through another? How could the son of a peanut farmer bring together two countries whose people had been ancient enemies? This is amazing stuff!

Learning about American history might not teach a child how to become a famous scientist or the CEO of a major corporation. But it can make a huge difference in their lives. It certainly has in mine.

Find this review on Sonderbooks at: www.sonderbooks.com/Childrens_Nonfiction/grover_cleveland_again.html