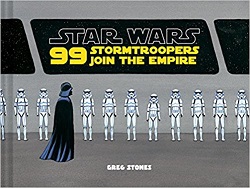 Okay, this book honestly made me laugh out loud. I’d never noticed how many different ways stormtroopers die in the Star Wars movies.

And that’s what this book is about. It begins innocently enough:

We see a relatively calm picture of Darth Vader reviewing his troops.

But one by one and group by group, bad things happen to the new recruits.

One stormtrooper fails to shoot first….

One stormtrooper asks for a promotion….

Thirty-six stormtroopers are stationed on Alderaan….

You get the idea. The illustrations are hilarious, too – with the joke often in the illustrations. (Sometimes we see an illustration showing a notable crash from the movie – with a stormtrooper in the way.)

Instead of page numbers, we’ve got a running count of how many stormtroopers are left.

The last lucky stormtrooper lives happily ever after… on the Death Star.

I’m afraid this may be the book that gets me to count stormtrooper deaths the next time I watch a Star Wars movie.

Find this review on Sonderbooks at: www.sonderbooks.com/Nonfiction/99_stormtroopers.html