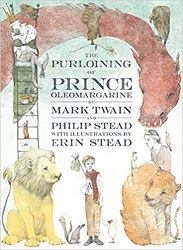 The Purloining of Prince Oleomargarine

by Mark Twain
and Philip Stead
with illustrations by Erin Stead

Oh, this is such a lovely book! The story is based on 16 pages of notes discovered in Mark Twain’s papers. It was discovered by a researcher hoping to write a Twain cookbook – found because of the word “Oleomargarine.” Mark Twain House & Museum authorized Philip and Erin Stead to make a book from those notes, which were based on a story Mark Twain spun for his daughters at bedtime while in a Paris hotel.

The result is delightful. Philip Stead retained Mark Twain’s folksy style. He presents it as a conversation with Mark Twain – but where Mark Twain disappears right before the story ends. He includes some discussion between the two authors. Here’s a small example:

“How did she know she was a fairy?” I asked.

“Because,” answered Twain, “the woman in question was only four and a half inches tall. It was the scientific conclusion to make. Now, let’s try not to interrupt, shall we?”

The story turns out to be a gentle one – about a boy named Johnny who, through his kindness, receives the gift of understanding the speech of animals and gains a family of animal friends. The animal friends are observant and know what happened when Prince Oleomargarine disappeared, so they tell Johnny.

The story is presented in picture book format, with Erin Stead’s delicate woodcut illustrations on each spread, and many spreads with few words or no words at all. It’s a book to savor slowly and would make magnificent classroom reading or for reading aloud at bedtime for a sequence of nights (imitating the original creation of the story).

Okay, I was browsing through the book for the delightful language, and found a part I simply have to quote. This is supposedly what Mark Twain said to Philip Stead as he was relating the story, and is off on quite a tangent from the tale of Johnny. It started with a skunk who was the first to befriend Johnny.

“Of course,” he added, “I could have saved myself – and Johnny – from the silly prejudices of the unenlightened. I could have lied and said porcupine or kangaroo instead of skunk.

“But if I lie to you once, you will never trust me again. And if history is our guide, our entire undertaking will be lost –

“Napoleon,” he explained, “lied to his men at Waterloo. He said: We are going to have a great time! They did not.

“King Henry VIII lied to Anne Boleyn, and the whole thing caused nothing but headaches.

“There are other examples, too! –

“Consider George Washington. He made an awful stink about the nobleness of truth telling after the fact, but the sad reality is this – he looked that cherry tree in the face and told it: This won’t hurt a bit.

“History tells us these things. And we can trust history on the matter of lies because history is mostly lies, along with some exaggerations.”

Here are Twain’s notes: (Much better in this book form!)
http://admin.rhcbooks.com/wp-content/uploads/2017/09/Twain-fragment.pdf

Find this review on Sonderbooks at: www.sonderbooks.com/Childrens_Fiction/prince_oleomargarine.html