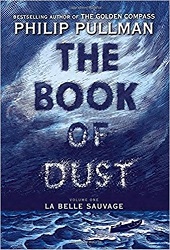 The Book of Dust, Volume One

It’s no secret that Philip Pullman is a magnificent writer. His rich use of language, his astonishingly detailed, imaginative worlds are all marks of a master craftsman. So, yes, I was impressed by how well-written this book was.

But did I enjoy it? Not so much.

This surprised me. I enjoyed The Golden Compass and The Subtle Knife. (Not enough to want to read them again, but I did enjoy them.) In this book, I liked the character of Malcolm tremendously – but not really anyone else.

This book is a prequel to His Dark Materials. Lyra, who is a young girl in those books, is now a baby – and a baby with a prophecy about her, a baby who needs protection. In the majority of the book, Malcolm is trying to rescue baby Lyra from danger in his canoe, named La Belle Sauvage, riding over floodwaters, pursued by one of the most horrific villains imaginable.

You don’t have to read the first trilogy to enjoy this, since it is a prequel. (Knowing Lyra must make it does help make things a little less scary.) Maybe if I had reread the original trilogy I would have been ready for what seemed like out-of-place fantastical elements, including an encounter with faeries and traveling through some sort of mystical kingdom. I know it’s an alternate universe, but I had forgotten that they’re not really going with a scientific explanation of alternate universes, since the one Lyra’s in has lots of magic.

And I know – it’s magic – it’s an alternate universe – but this time the explanation of “Dust” as an “elementary particle” of a “Rusakov field” responsible for consciousness – seemed rather silly. That’s not really how elementary particles work. This Dust is also what makes the alethiometer magically answer questions. And that, too, seems a bit silly reading it afresh. If the author just called it “magic” and didn’t try to make it sound scientific, it would work better. (Ah! That’s the problem! When I read The Golden Compass, I just thought it was dealing with a world where magic existed, and I hadn’t read any pseudo-scientific explanation.)

All that aside, there’s a fair amount of coincidence. How does the monstrous villain keep following Malcolm? Now, to be fair, that particular coincidence simply makes the book all the more intensely frightening. But when the good guy happens upon Malcolm later, that seems a little more remarkable.

I liked that Malcolm wondered how baby Lyra’s daemon could know the shapes of various animals to take on that it hadn’t yet seen. I imagine someone complained about that in the first book, so now it’s something remarkable about Lyra’s daemon rather than an oversight by the author.

And I do love the daemons – an animal expression of a person’s soul that lives outside their body. Children’s daemons can change form at will, but adults’ daemons have a set form. An interesting thing is that no two people in the book have the same form for their daemons.

I never do like it when the Church is villainous, though I knew to expect it from the first trilogy. In this book, there’s an extra sinister effort to get children to turn in their parents to the forces of evil run by the Church.

All that said, La Belle Sauvage is an absorbing read. Philip Pullman’s world-building is full of intricate details and extremely atmospheric. You can see this by how the book begins:

Three miles up the river Thames from the center of Oxford, some distance from where the great colleges of Jordan, Gabriel, Balliol, and two dozen others contended for mastery in the boat races, out where the city was only a collection of towers and spires in the distance over the misty levels of Port Meadow, there stood the Priory of Godstow, where the gentle nuns went about their holy business; and on the opposite bank from the priory there was an inn called the Trout.

The inn was an old stone-built rambling, comfortable sort of place. There was a terrace above the river, where peacocks (one called Norman and the other called Barry) stalked among the drinkers, helping themselves to snacks without the slightest hesitation and occasionally lifting their heads to utter ferocious and meaningless screams. There was a saloon bar where the gentry, if college scholars count as gentry, took their ale and smoked their pipes; there was a public bar where watermen and farm laborers sat by the fire or played darts, or stood at the bar gossiping, or arguing, or simply getting quietly drunk; there was a kitchen where the landlord’s wife cooked a great joint every day, with a complicated arrangement of wheels and chains turning a spit over an open fire, and there was a potboy called Malcolm Polstead.

Malcolm was the landlord’s son, an only child. He was eleven years old, with an inquisitive, kindly disposition, a stocky build, and ginger hair. He went to Ulvercote Elementary School a mile away, and he had friends enough, but he was happiest on his own, playing with his daemon, Asta, in their canoe, on which Malcolm had painted the name LA BELLE SAUVAGE.

Those that have read His Dark Materials will almost certainly want to read this. If you haven’t yet – you might prefer to start with that one since you can read all three books in succession and won’t be stymied by those annoying words that end this book: “To be continued . . .”

Find this review on Sonderbooks at: www.sonderbooks.com/Teens/la_belle_sauvage.html