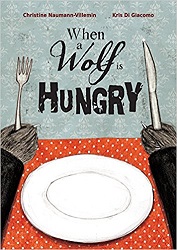 When a Wolf Is Hungry

I have a thing for books where someone gets eaten – or eating gets thwarted. When a Wolf Is Hungry falls into the latter category.

This is a book for sophisticated readers – more for elementary school readers than preschoolers. What’s going on is subtle, and a lot of fun when we finally see what’s happening. Here’s how it begins:

One Sunday morning, Edmond Bigsnout, lone wolf, left his home in the woods with a great big knife in his paw.

Edmond had a hankering for some rabbit.

Not just any ordinary cottontail, though. What he craved was a grain-fed, silky-haired rabbit, one with just a hint of sweetness. A city bunny.

So Edmond heads into the city.

He stopped in front of a tall apartment building.
He checked the names next to the buzzers and found exactly what he was looking for:
Max Omatose, miniature rabbit
5th floor

Oh, Edmond was so happy!
With the point of his knife,
he pressed the button for the elevator.
Ding!

Inside the elevator, he set down the knife and adjusted his bow tie.
(Just because a wolf is hungry, that doesn’t mean he can’t be fashionable.)

But of course, he forgot his knife in the elevator.

A turkey finds the knife in the elevator and says it’s just what she needs to cut this cake. So when Edmond comes back, it’s gone.

So he returns to try again with a chainsaw – and a bear asks to borrow it to trim a hedge on the roof. Similar fate befalls a rope, a big pot, and his barbecue grill. That one is borrowed by a lovely young wolf who thinks he’s a new neighbor.

When he’s had too much and decides to just eat the rabbit with some mustard, there’s a note on the rabbit’s door saying “I’m on the roof.” When the wolf reaches the roof, he finds all the apartment residents he encountered before, including the lovely young wolf. He finds out why they wanted to borrow his things – and let’s just say he makes some new life choices.

This one isn’t laugh-out-loud funny, but it’s understated and lovely and a happy ending for everyone.

Find this review on Sonderbooks at: www.sonderbooks.com/Picture_Books/when_a_wolf_is_hungry.html