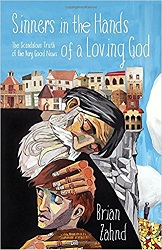 Sinners in the Hands of a Loving God

The Scandalous Truth of the Very Good News

Before I’d even finished this book, I was recommending it to people as a lovely and wonderful explanation of theology of the cross that I can get behind. It’s a compassionate outlook about a loving God, not a God who’s going to blast people.

Then I read the author’s interpretation of Revelation, and I’m not sure I’m still as enthusiastic. Basically, he says that everything in Revelation is symbolic – and believes a lot of it was for that time and has already happened. I’m not sure if I agree with this take – but I’m going to have to do some reading and thinking about Revelation.

Now, I’d thought the book was about universalism when I ordered it from Amazon. It’s not, though these teachings are very compatible with universalism. The author mentions universalism but says he just doesn’t know.

However, all that said – this explanation of the theology of the cross is indeed Very Good News.

Here’s an example from the first chapter:

What I want you to know is that God’s attitude, God’s spirit, toward you is one of unwavering fatherly-motherly love. You have nothing to fear from God. God is not mad at you. God has never been mad at you. God is never going to be mad at you. And what about the fear of God? The fear of God is the wisdom of not acting against love. We fear God in the same way that as a child I feared my father. I had the good fortune to have a wise and loving father, and I had deep respect, reverence, admiration, and, perhaps, a kind of fear for my father, but I never for one moment thought that my dad hated me or would harm me. God does not hate you, and God will never harm you. But your own sin, if you do not turn away from it, will bring you great harm. The wisdom that acknowledges this fact is what we call the fear of God. Sin is deadly, but God is love.

He does get his theology from the Bible, but has this word of caution:

We need to understand that the Bible is not an end in itself. The Bible is a means to an end but not the end itself. Jesus said it this way: “You search the Scriptures because you think they give you eternal life. But the Scriptures point to me!” If we see the Bible as an end in itself instead of an inspired witness pointing us to Jesus, it will become an idol. Idols are gods we can manage according to our own interests. If we want to make the Bible our final authority, which is an act of idolatry, we are conveniently ignoring the problem that we can make the Bible say just about whatever we want. In doing this we bestow a supposed divine endorsement upon our already established opinion. The historical examples of this are nearly endless; crusaders, slaveholders, and Nazis have all proved themselves adept at bolstering their ideologies with images drawn from the Bible.

About the cross itself, here is an example of his teaching:

The cross is not a picture of payment; the cross is a picture of forgiveness. Good Friday is not about divine wrath; Good Friday is about divine love. Calvary is not where we see how violent God is; Calvary is where we see how violent our civilization is. The justice of God is not retributive; the justice of God is restorative. Justice that is purely retributive changes nothing. The cross is not where God finds a whipping boy to vent his rage upon; the cross is where God saves the world through self-sacrificing love. The only thing God will call justice is setting the world right, not punishing an innocent substitute for the petty sake of appeasement.

There’s more here. As I said, I’m not sure yet what I think about his interpretation of the book of Revelation. But so much of this book is thoroughly encouraging and uplifting, I do heartily recommend taking a look.

Find this review on Sonderbooks at: www.sonderbooks.com/Nonfiction/sinners_in_the_hands_of_a_loving_god.html