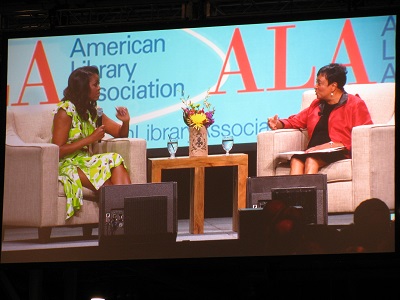 I spent last weekend at ALA Annual Conference in New Orleans, and one of the highlights was getting to hear Michelle Obama speak, interviewed by Carla Hayden, the Librarian of Congress.

My flight was delayed almost 4 hours, so I didn’t think I’d make it. Fortunately, there was lots of Opening-Session talk first. I was way in back, but I was in the room! 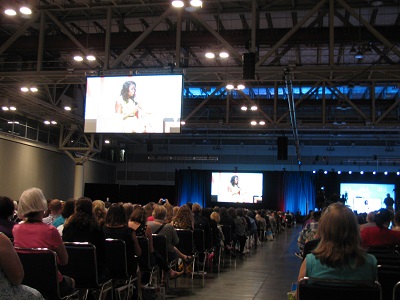 I left excited and inspired by her talk. Here are my notes on what she said:

They began by talking about her background with books. Carla Hayden actually knew her from libraries in Chicago.

Michelle said that she was the kind of kid who read to her stuffed animals. She remembers getting her first library card when she was four years old. The library was three blocks from their house, a community space.

She needed the escape of story the last 10 years, but most reading happened on longer trips. She’s not an ebook reader. Even now that she’s writing, she likes to hold it, feel it, touch it. As a result, they have lots of books on shelves. Her husband won’t let her get rid of them.

Her first real job was in a book bindery – doing the same thing over and over. It gave her respect for people who do work to pay the bills and don’t have the luxury of looking for their passion. Her father had MS, but faithfully went to his blue collar job. He put both his kids through Princeton. She’s who she is because of her parents.

She knows from experience why affordable child care is crucial. Her mom stepped in to take care of her kids when she was desperate and ready to quit working.

Her mom didn’t let anyone do her laundry at the White House – and she taught the girls to do their laundry. She kept them humble and focused on what was important.

Michelle’s mother listened and didn’t try to solve her problems for her. Her responses would be things like, “What are you going to do?” and “You know what to do!” She taught that from an early age – listened to and encouraged her kids to contribute and solve their own problems.

Michelle had many high-powered jobs before she was first lady. Had to switch from being an executive to being a spouse.

“You can have it all — but usually not all at the same time.”

Life is long. There are trade-offs that you make.

It’s not easy for women to tell someone we’re worth a lot. 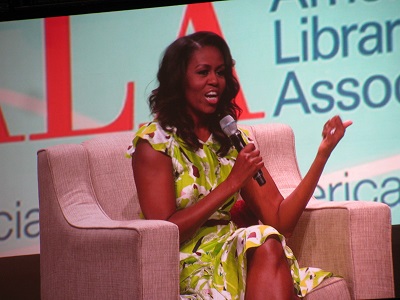 While writing her book, she’s been reliving these things and writing about them. There was no time to reflect in the White House. There was no room to make mistakes. They were laying the red carpet down for others to follow.

On her first trip to Africa, all in a few days, she did pushups with Bishop Tutu, met Nelson Mandela, went on a safari, and gave a speech to a group of young women. Later on, she literally forgot that she’d ever been to Prague.

Balance is a challenge.

8 men with guns accompanied their teenage daughters everywhere. There is an upside to that for parents! Though they wanted their kids to have a normal childhood.

If kids know you love them, you will be home for them. Kids are resilient. But there are a lot of broken kids out there — which shows that we need to do better.

Give yourself a break. Your kids are loved.

How do your kids interact in the world? They tried to teach their kids kindness, compassion, and empathy.

Let kids see you be good people in the world.

Kids want someone to tell them they’re okay. This could be the interaction that changes a kid’s life.

Women tend to make ourselves a low priority. The oxygen mask metaphor is real.

Michelle has a posse of women who keep her sane. She wants her daughters to see she has friends. They have been there for her since childhood, and when she was a new mother. She did a boot camp with friends at Camp David. Her girlfriends gave her support and fun.

We aren’t meant to parent in isolation. We need community. Build your village.

She wanted the White House to be a place of fun, especially during the tough times. 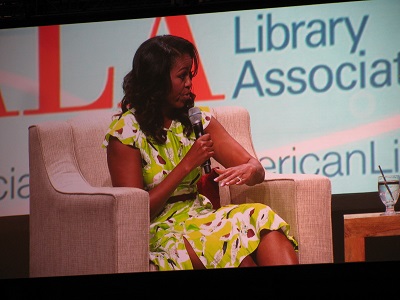 While they were in the White House, they tried to do a lot of things for kids, bringing them in from all over the country. Every major star who came to the White House had to also do a performance for kids.

She told about when Lin-Manuel Miranda came. He did the first song of Hamilton and told them it would be a Broadway show and they laughed and said, “Good luck with that!”

They did a mentoring program with 20 kids from DC – and saw a shift in who they thought they were.

If you can go in the White House, there’s no room you can’t enter. They gave that message to the young people who came.

Her book, Becoming, is a re-humanization effort. A black woman from a working-class background doesn’t often have a chance to tell her story.

We think there are only a handful of legitimate stories that make you a true American.

Her book hopes to show the ordinariness of an extraordinary story. She’s not a unicorn. There are many out there like her.

We’re all people with stories to tell.

We need to know everyone’s stories. Americans are good, decent people. There are no devils out there. Maybe if we listen to each other’s stories, we can be more empathetic, inclusive, and forgiving. 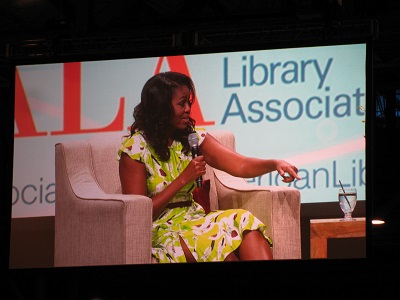