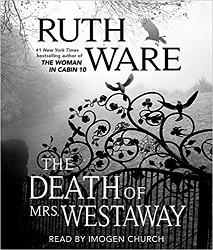 The Death of Mrs. Westaway

I’m reviewing another audiobook for adults! Our Newbery committee agreed not to listen to audiobooks of eligible books, since that might influence us one way or the other. So I’m using my commute to listen to books for adults. After reading The Woman in Cabin 10 and thoroughly enjoying spending time with a thriller, I was excited to see the library had an audio version of Ruth Ware’s latest thriller.

The Death of Mrs. Westaway is a completely different story from The Woman in Cabin 10, but it, too, sets the stage, lets you thoroughly understand the characters – and leads up to a completely tense, edge-of-your-seat, the-author-wouldn’t-really-let-her-die-would-she? moment.

At the beginning of this book, Harriet (known as “Hal”) Westaway receives a letter from her lawyer informing her that her grandmother has died and she needs to go to Trepassen House in Cornwall to receive her inheritance.

The thing is – Hal’s grandmother died before she was born. Her mother was single (said her father was a student she had a one-night stand with) and though she was named Westaway, her birth certificate lists a totally different name than the supposed grandmother of the letter.

But Hal is in deep financial trouble. When her mother died, Hal continued her tarot-reading booth on the pier in Brighton. But that’s not a reliable income, and she got in trouble borrowing money from a loan shark after her mother’s death, and now he wants her to pay back several times what she originally borrowed.

What if she just goes to Cornwall and tries to claim the money? They’re rich. Surely it won’t hurt them for her to take a little.

But when Hal gets there, she finds people with faces, not just selfish rich folks. Though there are some disturbing things about the house.

And then she finds out two things. One is that her mother spent time at Trepassen House right around the time Harriet was conceived. The other is that Mrs. Westaway named Hal in her will – and left her the bulk of her estate, passing over her three living children and the missing daughter who had the same name as Hal’s mother.

This book moves slowly, building the scenes and the relationships step by step by step. Which makes it all the more powerful when it comes to the terrifying, but ultimately satisfying, ending.

The narrator is the same one who read The Woman in Cabin Ten — and though Hal wasn’t as desperate a woman as that narrator, I enjoyed Imogen Church’s way of voicing her just as much. Though it’s no secret I’ll enjoy listening to anyone who has a British accent – she does a good job on top of that.

If you enjoy psychological thrillers, here’s another outstanding one.

Find this review on Sonderbooks at: www.sonderbooks.com/Fiction/death_of_mrs_westaway.html