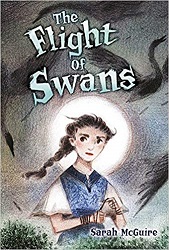 The Flight of Swans

Wow. Most of my readers know I love fairy tale retellings – this is a wonderful one, completely pulling me into the fantasy world, getting my very heart beating along with the protagonist, who tried to be silent for six years.

I reread the fairy tale after reading this book, and almost wish I hadn’t. The author retained the main elements – six older brothers turned into swans by the witch who enchanted and married the princess’s father, and she has to stay silent for six years, while knitting them shirts made out of nettles. But oh! The way she tells the story! I want to start reading it all over again. I’m actually a bit resentful that I need to keep reading other books. But the Newbery process being what it is – I know that I will read this book more times, and that’s a comfort to me.

Okay, I should tell about the book, not just rave about how good it is.

The book begins with Andaryn trying to fight her father’s enchantment:

The exile of the princes of Lacharra didn’t begin with swords or spells.

It began inside the castle kitchen with a quest for cloves.

It began with me.

Cooks mistrust anyone with empty hands, so I darted to the nearest table and snatched up a bowl of chopped leeks. Then I shouldered between scullery maids and undercooks as I moved toward the spice pantry.

Perhaps I was foolish. Maybe Father was just sick after being lost so many weeks in the forest. Maybe it was normal for a man newly married to hardly speak to the daughter he’d loved –

Then I remembered last night: Rees, the stable master, and the stable boy being beaten while Father looked on with empty eyes.

Something had happened to Father in the forest. He never would have allowed a beating for violating such a small edict, even if the woman he’d married had issued it.

Whatever she banned must be important – even if it was something as simple as cloves.

Andaryn secures some cloves and brings her father out of the enchantment – for a little while. But the Queen comes upon them together and quickly destroys Andaryn’s efforts. When Andaryn breaks the glamour her six older brothers feel for the Queen, her victory doesn’t last. The Queen locks them up, burning down the oldest brother’s castle with the brothers locked in the dungeon.

Andaryn bargains for their lives with her silence.

Finally, she spoke. “It would be a great sacrifice to release your brothers. I would expect something great in return: one year of silence for each of them. Not a word spoken,” she raised a finger, “and not a word written, either, for a word that’s written can be spoken. The moment you consent is the moment they are free.

Andaryn consents, and the Queen does set them free – but turns them into swans. They will take human form again only on the night of the full moon each month.

And so begins Andaryn’s journeys, in silence. It turns out it’s not enough to find a place to shelter, because the Queen sets otherworldly Huntsmen out after her.

Andaryn starts out as a 12-year-old determined princess. She ends the book as an 18-year-old young lady who has learned to be strong as steel through her suffering. A magnificent story.

Find this review on Sonderbooks at: www.sonderbooks.com/Childrens_Fiction/flight_of_swans.html