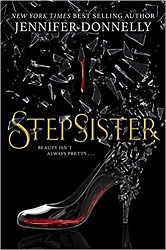 Stepsister was my airplane reading on my way back from ALA Midwinter Meeting and made the long flight a delight. It tells about Isabelle, one of Cinderella’s ugly stepsisters.

The story begins when Isabelle is ready to cut off her toes so they will fit into the glass slipper the prince has brought, after her sister Octavia was discovered to have cut off her heel.

“We should’ve heated the blade for Tavi,” Maman fretted now. “Why didn’t I think of it? Heat sears the vessels. It stops the bleeding. Ah, well. It will go better for you, Isabelle.”

It’s not easy, but Isabelle cuts off this part of herself, as she has cut off metaphorical parts of herself all during her life at Maman’s bidding.

And yet, when Maman demanded that she get up, Isabelle did. She opened her eyes, took a deep breath to steady herself, and stood.

Isabelle could do this impossible thing because she had a gift – a gift far more valuable than a pretty face or dainty feet.

Isabelle had a strong will.

She did not know that this was a good thing for a girl to have, because everyone had always told her it was a terrible thing. Everyone said a girl with a strong will would come to a bad end. Everyone said a girl’s will must be bent to the wishes of those who know what’s best for her.

Isabelle was young, only sixteen; she had not yet learned that Everyone is a fool.

Anyone who knows the fairy tale “Cinderella” knows that this didn’t go well for Isabelle. However, that’s only the beginning of this book.

There’s a Prologue that came before this, and we learn that the three Fates have a wager going wiith Chance, who appears as a bold and handsome young man.

He was dressed in a sky-blue frockcoat, leather britches, and tall boots. A gold ring dangled from one ear; a cutlass hung from his hip. His face was as beautiful as daybreak, his smile as bewitching as midnight. His eyes promised the world, and everything in it.

Isabelle is the very mortal whose life map (showing her fate) Chance has stolen. The Fates are not happy about it.

“All this trouble for a mere girl?” asked the crone, regarding Chance closely. “She’s nothing, a nobody. She possesses neither beauty nor wit. She’s selfish. Mean. Why her?”

“Because I can’t resist a challenge,” Chance replied. He rerolled the map with one hand, steadying it against his chest, then tucked it back inside his coat. “And what girl wouldn’t choose what I offer?” He gestured at himself, as if even he couldn’t believe how irresistible he was. “I’ll give her the chance to change the path she is on. The chance to make her own path.”

“Fool,” said the crone. “You understand nothing of mortals. We Fates map out their lives because they wish it. Mortals do not like uncertainty. They do not like change. Change is frightening. Change is painful.”

“Change is a kiss in the dark. A rose in the snow. A wild road on a windy night,” Chance countered.

“Monsters live in the dark. Roses die in the snow. Girls get lost on wild roads,” the crone shot back.

So there’s something at stake as Isabelle’s life plays out. The stepsisters’ story becomes known to the people around them, giving them contempt from the other villagers. Then war comes close to the region. Isabelle hears from a fairy queen a way to change her fate, but will she dare seize that? And meanwhile, neither Chance nor the crone of the Fates is shy about inserting themselves into Isabelle’s story to make sure they win the wager.

Yes, some may say you need to cut off pieces of yourself to make your way in the world. But this book suggests that it’s possible to recover those pieces again and take your fate in your own hands. A wonderful story about what happens after the fairy tale.

Find this review on Sonderbooks at: www.sonderbooks.com/Teens/stepsister.html