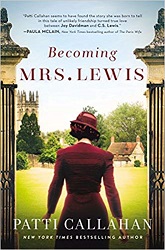 It was good to again have a novel keeping me up late at night reading (we’re talking 3 am), and since it was a novel for grown-ups instead of all the children’s books I read last year for the Newbery – it kept me up late more than one night. This wasn’t necessarily a good thing – except that it was nice to be pulled into the world of the novel that thoroughly.

This book tells the same story as one of my favorite movies, Shadowlands with Anthony Hopkins, but of course the book went into much more detail. It’s the story of Joy Davidman and how she fell in love with C. S. Lewis and married him. But they didn’t have long together, because she got cancer.

I don’t feel like I’m giving away too much, even though the marriage happens at the end of the book – because anyone who knows that C. S. Lewis wrote A Grief Observed about his much loved wife will know this is coming. And, oh yes, the book is called Becoming Mrs. Lewis. So it’s not a surprise that they fall in love. The story is in the exquisite way they fall in love.

The book opens with Joy Gresham’s salvation experience. Although she’d been an atheist, in a moment when she was feeling desperate, stranded at home after a call from her drunken husband, thinking he was either committing suicide or with another woman – she suddenly felt the presence of God.

God didn’t fix anything in that moment, but that wasn’t the point of it all. Still I didn’t know where Bill was, and still I was scared for his life, but Someone, my Creator it seemed, was there with me in all of it. This Someone was as real as my sons in their beds, as the storm battering the window frames, as my knees on the hardwood floors.

After she became a Christian, she had many questions about her faith, and then read an article about C. S. Lewis which led her to read and reread all of his books (the ones written by 1950). She talked to the professor who’d written the article, and he urged her to write a letter to C. S. Lewis, thinking he could answer some of her questions about her relatively new faith.

And so began their long and avid correspondence.

The book includes excerpts from their letters, though I was disappointed to learn at the back that we don’t have existing copies of the actual letters. Patti Callahan used his other writings and talks to simulate their correspondence. But she did have a set of poems of longing that Joy had written during that time and dedicated to Jack. Some lines from the poems are at the head of each chapter.

In so many ways, this is a novel of longing. Because Joy fell in love with Jack long before he fell in love with her – but their friendship blossomed from the start. First, it was in their letters. They each found a correspondent who understood and to whom they could really open up.

Joy and her husband were both writers and were having trouble getting work finished. Joy had some health troubles and decided to go to England. She could stay with a friend who was living in London, research a book she had begun on King Charles II, and even get her teeth fixed and get medical care she’d been putting off because medical care in England was almost free even to tourists, and she couldn’t afford it in America. Her cousin Renee and her two daughters had been staying with them since her divorce, so Renee could hold down the fort while Joy tried to get back on track in England. And she could finally meet Jack, to whom she’d been writing for three years.

And in England her friendship with Jack deepened. And her husband ended up having an affair with Renee.

But it’s all told in much more exquisite detail than that. Joy already had a firm and deep friendship with Jack on that first trip to England. She went back to her home in America to get her sons and straighten things out – and file for divorce.

But divorce wasn’t easy to get in the 1950s. She was still technically married when she moved back to England with her boys. After the divorce did go through, the authorities had extended her visa too often, and she was going to have to move back to America. A civil marriage in name only to Jack allowed her to stay. In the Shadowlands movie, this was her idea. In this book, it’s Jack’s idea, because he doesn’t want her to leave. She was typing his manuscripts for him and essentially collaborating with him on the book Till We Have Faces.

But even after her divorce had gone through, the Anglican church still wouldn’t permit their marriage – and Jack scrupulously wouldn’t allow himself to fall in love with her. He’d written The Four Loves by then, and was keeping things as philea brotherly love. Even though she was obviously precious to him.

There’s a wonderful chapter where Joy comes to peace with this. She has long loved him, and he’s not loving her back. They’ve written Till We Have Faces together.

It was as clear as if someone had walked into the room and ripped the veil off my soul, forcing me to stare into its darker depths. Much of what I’d done – mistakes, poems, manipulations, success and books and sex – had been done merely to get love. To get it. To answer my question: do you love me? Even as I gave love, was I trying just to gain it? Had it really taken the fictional Orual to show me the truth?

In my bedroom, I fell to my knees on the hard floor and rested my head on the edge of the mattress, pressing my face into the softness.

The face I already possessed before I was born was who I was in God all along, before anything went right or went wrong, before I did anything right or wrong, that was the face of my true self. My “bareface.”

From that moment on, the love affair I would develop would be with my soul. He was already part of me; that much was clear. And now this would be where I would go for love – to the God in me. No more begging or pursuing or needing. It was my false self that was connected to the painful and demanding heart grasping at the world, leading me to despair. Same as Orual. Same as Psyche. Same as all of humanity.

Possibly it was only a myth, Jack’s myth, that could have obliterated the false belief that I must pursue love in the outside world – in success, in acclaim, in performance, in a man.

The Truth: I was beloved of God.

Finally I could stop trying to force someone or something else to fill that role.

The pain of shattered illusion swept through me like glass blown through a room after a bomb.

I was already loved. That was the answer to any question I held out to the world.

This was a beautiful time in my life to read this. I’m divorced and have an empty nest. After finishing the Newbery reading, I decided I no longer have an excuse not to go back online – but for various reasons I’m not setting my heart on quickly finding a good match there.

So to read about the peace she got, loving this good man who didn’t think it was right to love her back – that peace passed on to me. Yes. I, too, am loved. I, too, am doing my work, living my life, caring about my friends – all under God’s hand.

And when did C. S. Lewis finally come around? When did he finally marry her before God? After she was diagnosed with cancer and given only a few months to live.

But this book is not a tragedy. In fact, it’s one of the most beautiful love stories I’ve read in a long time.

And though I’ve told a lot of what happens, because it’s really not a secret (And watch the movie Shadowlands if you haven’t already!) – the beauty of this book is in how it all happens, the beautiful details along the way. You’ve got wise gems from C. S. Lewis as they discuss their faith – and lots of wisdom from Joy Davidman as well.

It’s an exquisite and slowly unfolding love story between two remarkable people, but it’s also full of wisdom about life and about God’s working in the world and observations about what it was like for a strong woman to make her way in the world in the 1950s. I’m afraid the worst effect of the book was that it made me want to pack up and just move to England. (Finding an Englishman to marry me might be a problem, though.)

Find this review on Sonderbooks at: www.sonderbooks.com/Fiction/becoming_mrs_lewis.html