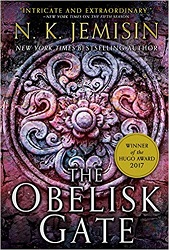 I wish I could say that I enjoyed this book more than I did. It is the middle book of the first-ever trilogy to have all three books win the Hugo Award. The world-building is intricate, complex, and mind-blowing.

I’ll say the good things first. I indeed understood better what was going on in the second book, and appreciated the richness of the background that her way of writing the first book gave us. In this book, Essun has lost track of her daughter Nassun, but the reader gets to follow both. Both find a place of refuge against the Season which is building up – ash covering the sky and the whole world hunkering down and trying to survive.

Orogeny – the ability to sense and manipulate the movement of the earth and stone – is commonplace in that world, although feared by the “stills.” Both Essun and Nassun are powerful orogenes still growing in their power. In this book, they each also discover an ability to sense magic – silver threads in the world and people and creatures around them.

Most of the book is about their survival concerns in two different locations. Essun is in an underground comm that accepts orogenes – or do they? Nassun is far to the south, still learning from Schaffa – and we’re not sure if that’s a good thing or very, very dangerous.

But we do sense that something much, much bigger is at stake. We learn that the moon left the earth’s regular orbit long ago – and that’s what started the cycle of fifth seasons. But it’s due to come back around before long. Alabaster is dying – but he’s trying to teach Essun what she will need to be able to do to deal with that. And then there are those obelisks in the sky, obelisks with strange and awesome power. And stone eaters – those statue-like creatures that move either very slowly or more quickly than sight – turn out to be both benevolent and malevolent, with agendas of their own.

This book is also very violent. You should not pick this up if you’re looking for pleasant, light-hearted reading. The earth has been broken, and everyone on it is somewhat futilely fighting for survival. Unfortunately, this is the book I was reading when I tried to read on the metro going into DC and was struck with motion sickness. Alas! In that section, a couple of arms got cut off and many people died in gruesome ways. That was decidedly not good for decreasing my nausea. So I’m afraid that influenced my enjoyment of the book.

I am indeed fascinated by the world-building, and I do want to know what happens next, so I will be finishing the trilogy before long. But I’m going to read something light and fluffy first!

Find this review on Sonderbooks at: www.sonderbooks.com/Fiction/obelisk_gate.html