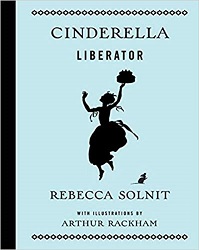 by Rebecca Solnit
with illustrations by Arthur Rackham

Oh, this is a marvelous retelling of Cinderella! Modifications have been made, with the result being a thing of delight even to the young feminist heart. No, Cinderella doesn’t marry the prince, but the prince gets a happy ending, as do the stepsisters. Everyone in the story gets to become their best selves.

She chose silhouettes done by Arthur Rackham in 1919 for the illustrations, which are exquisite and add to the fairy tale feeling – which is there all the way, even though the details are tuned to more modern sensibilities.

This is a story I’d love to read to an attentive audience. In fact, I will probably choose portions to read aloud when I’m doing booktalks in the local elementary schools. I’m going to quote here a few of the many passages that delighted me.

The beginning of Chapter 2, “Dresses and Horses”:

And then one day came the news that the king’s son, Prince Nevermind, was holding a great ball, which is what they called dance parties in those days. The stepmother made sure that Pearlita and Paloma were invited, and they spent days trying on clothes and ordering dressmakers to make them new dresses out of satin and velvet and glitter and planning how to put up their hair and stick it full of jewels and ornaments and artificial flowers.

Paloma was sewing extra bows onto her dress, because she thought that, surely, having the fanciest dress in the world would make you the most beautiful woman in the world, and being the most beautiful would make you the happiest. They weren’t very happy, because they were worried that someone might have higher hair or more bows than they did. Which, probably, someone did. Usually someone does.

But there isn’t actually a most beautiful person in the world, because there are so many kinds of beauty. Some people love roundness and softness, and other people love sharp edges and strong muscles. Some people like thick hair like a lion’s mane, and other people like thin hair that pours down like an inky waterfall, and some people love someone so much they forget what they look like. Some people think the night sky full of stars at midnight is the most beautiful thing imaginable, some people think it’s a forest in snow, and some people . . . Well, there are a lot of people with a lot of ideas about beauty. And love. When you love someone a lot, they just look like love.

This section comes after the ball:

Five of the horses said, in horse language, which fairy godmothers speak and most of us do not, that they loved running through the night and being afraid of nothing and bigger than almost everyone. The sixth horse said she’d had a lot of fun but she had mice children at home and wanted to get back to them. The fairy godmother nodded in understanding, and suddenly the sixth horse shrank, and lost its mane, and its shaggy tail became a pink tail with a fine fuzz like velvet. And there she was: a tiny gray mouse with pink feet, running back to her tinier pink children in the nest in the wall to tell them all about the enchantment that had made her a horse for a night.

And then the lizards said, in the quiet language of lizards, that nothing was better than being a lizard, being able to run up walls and to lie in the sun on warm days and to snap up flies in the garden and never worry about anything except owls and crows, and though they loved wearing silver satin, and going to parties, and they had been happy to help Cinderella, and they would tell all their lizard friends about it, they would rather be lizards again. And suddenly they were, running off toward the garden on their little lizard legs, trailing long lizard tails, the moon making the scales on their lean lizard bodies shine like silver.

If I copy out anything further in the story, I might give away too many crucial changes at the end, but I hope this gives you the idea. There’s an Afterword at the back that describes the author’s thoughts about the tale.

Here’s a retelling of Cinderella for our current times, and it is utterly delightful in every way.

Find this review on Sonderbooks at: www.sonderbooks.com/Childrens_Fiction/cinderella_liberator.html