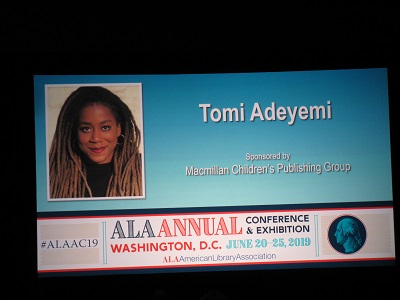 On my final day of ALA Annual Conference in DC, I spent far too much time in line to get to meet George Takei and get a signed excerpt from his book. After that, I roamed the exhibits. I did manage to get some free copies of two of Meg Medina’s backlist titles as well as some other goodies and then had lunch. By that time the afternoon was getting on, and I went to the Auditorium Speaker Series to hear Tomi Adeyemi speak. She is the author of a bestselling Western African Fantasy series. 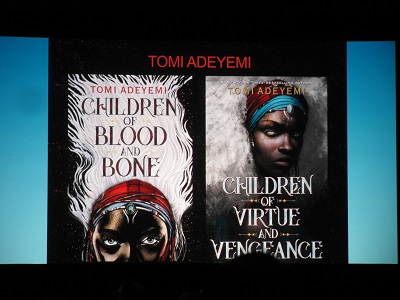 The moderator was Dr. Rose Brock.

RB: Why did you choose a fantasy setting?

TA: A story embedded in my DNA is Avatar: The Last Airbender. She wanted such a fully formed world. Before this story, she hadn’t realized there could be black gods and goddesses — not even in her own imagination.

She was in a Brazilian gift shop and saw art of gods and goddesses with black people in them.

From two paintings with black people in them, The Children of Blood and Bone was born. It shows the importance of representation. This is what can happen when you see a little bit of yourself.

The story was also influenced by The Hunger Games and the ugly backlash online that happened when good characters were black. It was also the year Trayvon Martin was shot.

She realized that it’s real and it’s deep. An unraveling started.

It got her feeling hopeless. Why dream? Why work hard? Why achieve anything?

At first, she thought her story would take something like the form of The Hate U Give.

When she made her plan, she discovered her Police Brutality story and her West African Fantasy were the same story.

She reclaimed common tropes from fantasy.

Every obstacle in the book is based on real things black people have gone through.

We all have prejudice on all sides. Zalie gets to hit people and express anger the author feels!

We experience it as a human empathizing with another human.

People in pain lash out. Hurdles on both sides, even where there are good intentions. 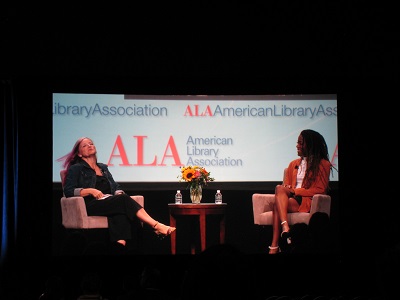 She didn’t admit to herself that she wanted to be a writer. She started a blog because she heard it helps you to get published — and it was very satisfying and could be finished.

Her first draft is literally a deformed potato. And she says that to demystify the process. Stories come together in revision — that’s important to know.

Hey, it’s all going to be bad for several drafts. It’s all failure. 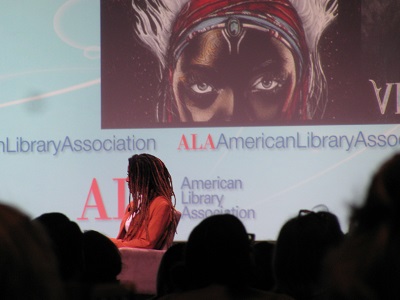 Before this, even the stories she wrote for herself were white people. She brought childhood stories where the characters were named Tomi — and they were white. She didn’t think she could write about black people.

All it takes is seeing people to humanize them.

The hardest part of the book to write was the Author’s Note. Then she couldn’t hide behind fantasy. 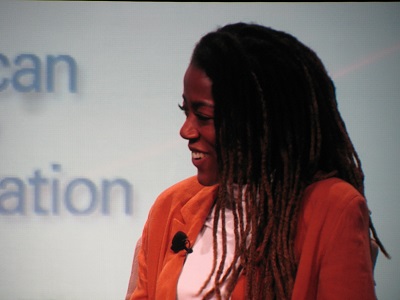 RB: How do you take care of yourself?

TA: Terribly with the first one!

She did realize she’d have to change. She’s become a workout nut to get the book out of her head. She’s learned to say Yes to things.

Her allegiance is always to the story and the reader.

It has to be a powerful story first. 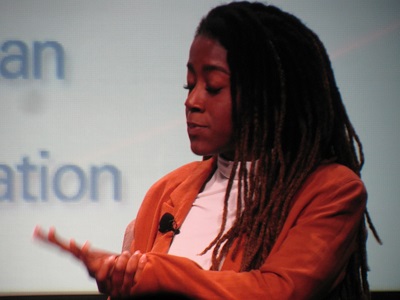 “The only thing more American than racism is capitalism.”

She’s trying to write good stories with things that haven’t been seen before. Five years earlier, she might have been told to make her characters white.

Racism isn’t over. We need to keep working. It’s a system and one title doesn’t fix it.

The only other book she knows of with a black face in detail on the cover is Michelle Obama’s book.

Her second book is a bigger adventure — but gets to be a step away from pain.

Question from the audience: How do you put your voice out there?

TA: I pump myself up. But being apologetic is inefficient. Only you are fully you and that’s what resonates.

Pump yourself up. Then do what you need to do. 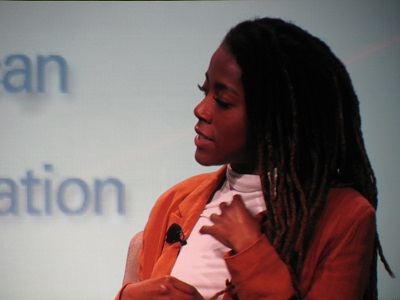