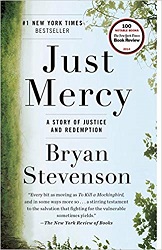 A Story of Justice and Redemption

A big thank you to the Racial Reconciliation Group at Floris United Methodist Church for choosing this book for a book discussion. I confess, I did not read this book in time to participate in the discussion, but their choice brought it to my attention, and the book blew me away.

This book is the story of a young lawyer who in 1983 did an intensive course on race and poverty litigation, met some prisoners on death row, saw their humanity, and began working for people who didn’t have a voice and were not receiving either justice or mercy.

After talking about his first experience visiting a prisoner on death row, here is how Bryan Stevenson introduces this powerful book:

This book is about getting closer to mass incarceration and extreme punishment in America. It is about how easily we condemn people in this country and the injustice we create when we allow fear, anger, and distance to shape the way we treat the most vulnerable among us. . . .

After graduating from law school, I went back to the Deep South to represent the poor, the incarcerated, and the condemned. In the last thirty years, I’ve gotten close to people who have been wrongly convicted and sent to death row, people like Walter McMillan. In this book you will learn the story of Walter’s case, which taught me about our system’s disturbing indifference to inaccurate or unreliable verdicts, our comfort with bias, and our tolerance of unfair prosecutions and convictions. Walter’s experience taught me how our system traumatizes and victimizes people when we exercise our power to convict and condemn irresponsibly – not just the accused but also their families, their communities, and even the victims of crime. But Walter’s case also taught me something else: that there is light within this darkness.

Walter’s story is one of many that I tell in the following chapters. I’ve represented abused and neglected children who were prosecuted as adults and suffered more abuse and mistreatment after being placed in adult facilities. I’ve represented women, whose numbers in prison have increased 640 percent in the last thirty years, and seen how our hysteria about drug addiction and our hostility to the poor have made us quick to criminalize and prosecute poor women when a pregnancy goes wrong. I’ve represented mentally disabled people whose illnesses have often landed them in prison for decades. I’ve gotten close to victims of violent crime and their families and witnessed how even many of the custodians of mass imprisonment – prison staff – have been made less healthy, more violent and angry, and less just and merciful.

I’ve also represented people who have committed terrible crimes but nonetheless struggle to recover and to find redemption. I have discovered, deep in the hearts of many condemned and incarcerated people, the scattered traces of hope and humanity – seeds of restoration that come to astonishing life when nurtured by very simple interventions.

Proximity has taught me some basic and humbling truths, including this vital lesson: Each of us is more than the worst thing we’ve ever done. My work with the poor and the incarcerated has persuaded me that the opposite of poverty is not wealth; the opposite of poverty is justice. Finally, I’ve come to believe that the true measure of our commitment to justice, the character of our society, our commitment to the rule of law, fairness, and equality cannot be measured by how we treat the rich, the powerful, the privileged, and the respected among us. The true measure of our character is how we treat the poor, the disfavored, the accused, the incarcerated, and the condemned.

We are all implicated when we allow other people to be mistreated. An absence of compassion can corrupt the decency of a community, a state, a nation. Fear and anger can make us vindictive and abusive, unjust and unfair, until we all suffer from the absence of mercy and we condemn ourselves as much as we victimize others. The closer we get to mass incarceration and extreme levels of punishment, the more I believe it’s necessary to recognize that we all need mercy, we all need justice, and – perhaps – we all need some measure of unmerited grace.

This was a difficult book for me to read. As a white woman who’s never had a personal encounter with the justice system, I’d like to believe that our justice system in America is fair and above board, and if you do no wrong, you won’t have any trouble with it.

Bryan Stevenson does highlight the story of Walter McMillan, telling about his case in alternate chapters. Walter was an African American on death row for a crime he couldn’t possibly have committed – since it happened the same time as a barbecue he attended, and multiple witnesses saw him there. The story of how the murder was pinned on Walter is complicated, involving plenty of racism, sentiment against him because he had an affair with a white woman, a strong desire to pin the crime on someone, pressure on the unreliable witness who testified against him, and a public defender who didn’t make much of an effort, among many other factors.

Even working hard on Walter’s case, there were still numerous obstacles to vindicating Walter, and he ended up spending six years of his life on death row, causing layers of pain to his entire community, since their testimony hadn’t been heeded.

The chapters in between the ones about Walter’s story tell about so many other people who needed justice. Some wrongfully accused and convicted, some harshly punished out of proportion to the crime. I learned that death by electrocution can be horribly painful. I’d had no idea. In view of recent law changes, especially heart-wrenching were stories of women who miscarried when alone – and then were convicted of murdering their newborn infant. This happened despite how much the women wanted to have a baby, and even to a woman who miscarried so early, there’s no way a baby could have survived.

So this book filled my heart with sadness and disillusionment – yet the focus is hope. And the book is written by a man who’s fighting for justice and making good progress at changing laws and helping folks wrongly imprisoned be set free.

In the Epilogue, Bryan Stevenson tells us some things he learned from Walter:

Walter had made me understand why we have to reform a system of criminal justice that continues to treat people better if they are rich and guilty than if they are poor and innocent. A system that denies the poor the legal help they need, that makes wealth and status more important than culpability, must be changed. Walter’s case taught me that fear and anger are a threat to justice; they can infect a community, a state, or a nation and make us blind, irrational, and dangerous. I reflected on how mass imprisonment has littered the national landscape with carceral monuments of reckless and excessive punishment and ravaged communities with our hopeless willingness to condemn and discard the most vulnerable among us. I told the congregation that Walter’s case had taught me that the death penalty is not about whether people deserve to die for the crimes they commit. The real question of capital punishment in this country is, Do we deserve to kill?

Finally and most important, I told those gathered in the church that Walter had taught me that mercy is just when it is rooted in hopefulness and freely given. Mercy is most empowering, liberating, and transformative when it is directed at the undeserving. The people who haven’t earned it, who haven’t even sought it, are the most meaningful recipients of our compassion. Walter genuinely forgave the people who unfairly accused him, the people who convicted him, and the people who had judged him unworthy of mercy. And in the end, it was just mercy toward others that allowed him to recover a life worth celebrating, a life that rediscovered the love and freedom that all humans desire, a life that overcame death and condemnation until it was time to die on God’s schedule.

This was an amazing and powerful book that shook up my worldview. I hope many more people will read it, and it’s consistently on hold, which is a good sign. It was because I was reading this book that my heart sank when I read the news that federal executions are going to begin again. This book will change your perspective. Highly recommended.

Find this review on Sonderbooks at: www.sonderbooks.com/Nonfiction/just_mercy.html