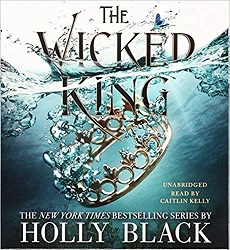 The Wicked King is the sequel to The Cruel Prince, and was just as action-packed and full of plots and intrigue as that one.

In this installment, Jude, a mortal who has grown up in Faerie, has gained power over Carden, who once bullied her and is now the High King of Faerie. (Never mind how she gained power – that’s what the first book was about.) Jude’s twin sister Taryn is getting married to Locke, another immortal who has treated Jude terribly.

But gaining power is one thing; keeping it is quite another. The Queen of the Sea is plotting something with Carden’s older brother, who had expected to gain the throne but is now in prison for murder. And it looks like they will make their move at Taryn’s wedding.

There are plots within plots, shifting alliances, and confusing feelings toward Carden. Can Jude navigate it all, stay alive, protect her little brother, and keep hold of the power she finds she enjoys perhaps a little too much?

There’s a lot more I could say, but I don’t want to give anything away. I don’t think I’ve expressed how gripping this book is, with one tense situation happening after another. It ends at a satisfying place – but also at a place where you need to know what will happen next! The next book cannot come out soon enough for me!

Find this review on Sonderbooks at: www.sonderbooks.com/Teens/wicked_king.html