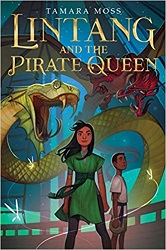 Lintang and the Pirate Queen

Lintang lives on the Twin Islands, not part of the United Republic, and she’s known as a storyteller and a troublemaker. Lintang wants nothing more than to see the world.

When the Pirate Queen comes to their island, she needs an islander on board to get past the giant mythie Nyssamdra, the island’s guardian. Lintang is thrilled when she gets chosen.

But when she discovers a stowaway, her best friend Bayani, she has to decide if she will risk the Pirate Queen’s trust and tell her about the stowaway or be loyal to her friend. To make matters worse, Bayani won’t tell her why he wants to get to the island of Zaiben so badly.

The fantasy world of this story is inhabited by “mythies,” and most chapters are preceded by an entry from The Mythie Guidebook — and then that particular mythie shows up in the chapter. It begins with a tiny pixie – known for mischief – and continues through giant and fearsome creatures such as dragons and sirens.

The existence of sirens is the reason that most ships are crewed by women – who aren’t affected by the call of the siren. I do love that this book included a transgender man – who was in fact affected by the siren, though some thought he wouldn’t be.

It turns out that Bayani knows a secret about mythies that changes everyone’s perspective on them and can shake up the world. But will anyone believe him?

This is a fun fantasy adventure story about an impulsive girl seeing the world, learning to think before she acts, and loyally helping her friends.

I do have a few little issues about the way the fantasy world works, but I doubt that those issues will bother most readers.

Not everything is neatly wrapped up in this book, so I suspect and hope there will be more to come.